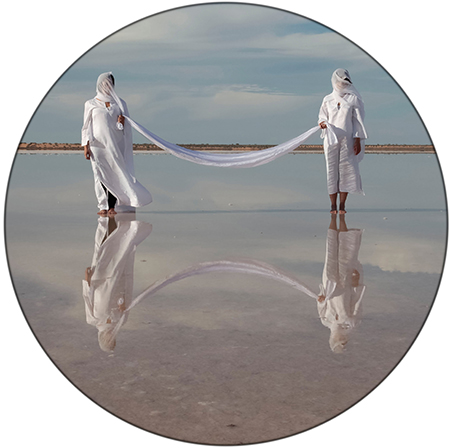 Patterns, symmetry and symbolism from Islamic art traditions play an exquisitely poetic role in Sama Alshaibi’s photographs and multimedia works using Middle Eastern and North African landscapes as their setting. Alshaibi is an Iraqi-born political refugee who splits her time between Tucson, Arizona, and Ramallah, Palestine. SMoCA is premiering the exhibition, called “Silsila,” which means “link” in Arabic.

The majority of works, including large-scale circular chromogenic prints on Diasec, depict women in traditional Islamic garb, such as full-length black cloaks and veils. The clothing picturesquely swirls around them in the wind, and sometimes the garb is embellished with jewel-toned headscarves, which lends a sense of empowerment to Alshaibi’s subjects as they pose majestically in desert terrains. Her predilection for patterns and symmetry comes through in “Ma Ijtama at Aydina ala Qabdih Kan Mu attal (What Our Hands Joined Was Broken),” in which she repeats an image of a blue-sheathed woman to create a kaleidoscope effect.

A darkened, pentagonal-shaped room serves to spotlight five of Alshaibi’s videos, where the women are juxtaposed against their environment in hypnotic, slowed-down images of  wind-swept dunes, placid bodies of water, floating feathers and cottony clouds against blue skies. Here, Alshaibi clarifies her messages about the links between individuals, humans’ link to the natural world, and the links between the self and the divine. The religiosity aside, Alshaibi’s works are meditations on connections, harmony and balance.