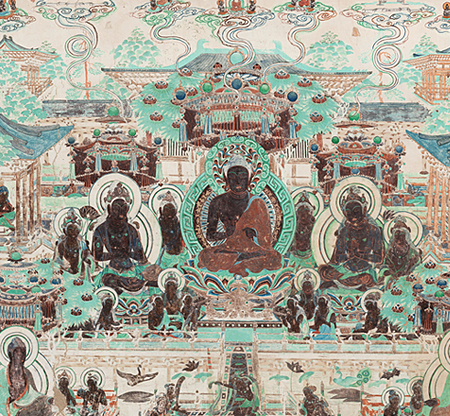 From the 4th century until their abandonment in the 14th and subsequent 20th century revitalization, a string of Buddhist cave temples on the edge of the desolate Gobi dessert, near the oasis of Dunhuang, served as a social, cultural, commercial and religious crossroads. It linked East with West on China’s Silk Road. Hand carved into the cliff face of alluvial conglomerate rock that runs along the Daquan river, the walls of the caves were plastered in a mixture of clay, sand and plant fiber as a ground for colorful, ornate paintings created primarily as forms of Buddhist devotion leading towards promises of a better after-life. The original caves currently attract more visitors than they can safely accommodate without deterioration.

In an effort towards conservation and site stabilization, the Getty has worked in partnership with the Dunhuang Academy on the management of the original site with tactics that include the erection of carefully crafted duplicates the public can visit off site. As a result, local audiences can now step into any of three exact, full scale replica caves that have been erected on the plaza. In addition, the research gallery exhibits over 40 objects discovered in the so called “Library” cave. The world’s oldest dated complete painted book, a sacred Buddhist text, titled the “Diamond Sutra” is on display. Visitors can use 3-D glasses to experience stereoscopic images of Cave 45 along with its seven figure sculpture group. Cave 320’s colorful central peony motif ceiling and collection of small Buddhas is another highlight.