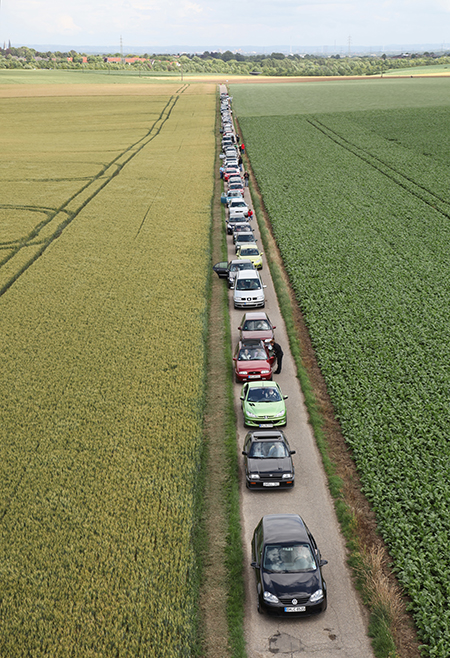 Stockholm-based artist Johanna Billing’s exhibition, “Learning How to Drive a Piano,” presents two films, though it’s her 22-minute long “Pulheim Jam Session” that’s the centerpiece. The vast gallery space has been transformed into a theater for the looped screening of this one work, monumentalizing this poetic film on an unlikely subject: an intentional traffic jam.

“Pulheim Jam Session” is set in the German city referenced in the title, and commences with the footage of the film crew setting up in a barn, where a piano is loaded in off a truck. As Swedish musician Edda Magnason sits down to play, the view changes to an empty, rural road that runs between vast fields of crops. Slowly, cars begin to arrive at this spot in the road, the citizens of Pulheim parking in a long line behind one another. The majority of the film is occupied by folks killing time as they wait: texting, doing homework, playing fetch with dogs and gazing out upon the breeze-rippled fields. Magnason’s jazz fluctuates from leisurely harmony to brisk discord as the cars’ occupants either embrace the downtime, or become antsy to move on. Without a cue, the drivers start their vehicles and disperse, honking horns at each other not in aggravation, but to bid farewell. So too does the pianist cease playing at the barn, and her instrument is returned to the truck.

With the appearance of the film crew on camera, the shining, grand piano deposited in the dirty barn, and the “traffic” coordinated on an otherwise empty road, Billings emphasizes the contrivance of these situations. “Pulheim Jam Session” isn’t necessarily finding beauty in a normally unpleasant, everyday experience, but rather suggests that the means to create a simple and meaningful collective experience can be culled from what is already around us.