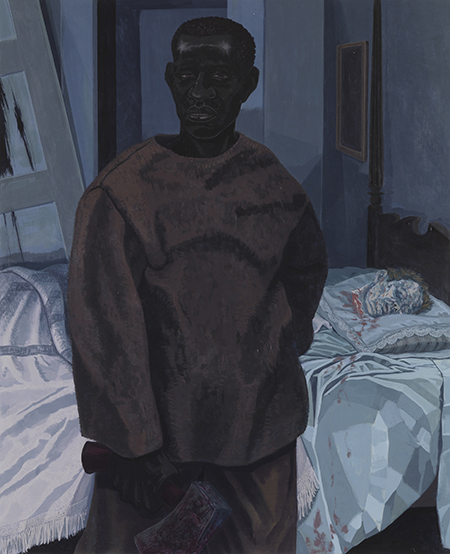 Kerry James Marshall made a choice to wait until he was 60 before agreeing to a retrospective exhibition. Now just past that landmark birthday, the renowned Chicago artist takes center stage in “Mastry.” Marshall paints with impeccable skill, loading his narrative works with a range of content. However, the show stuns at first impression for the simple reason that picture after picture, wall after wall of the MCA’s entire fourth floor are filled with representations of African American figures who convey the breath and depth of their American struggles and triumphs.

Viewing Marshall’s oeuvre all at once reveals the way that the artist’s messages have multiplied and varied over time, all while featuring the black body at the core. In some works, the artist’s subjects are heroic and historical, as in “Portrait of Nat Turner with the Head of His Master” (2011); in others, his figures simply capture a glimpse of regular lives, like a couple casually undressing in their bedroom. Some paintings are charged, addressing some of the most painful results of racism, like “The Lost Boys” (1993), inspired directly from a news story of black children killed by police. Whether Marshall’s works are fantastical, joyful, dark, biting or sorrowful, the sheer range of complex contents is what makes his works so relatable and so real.