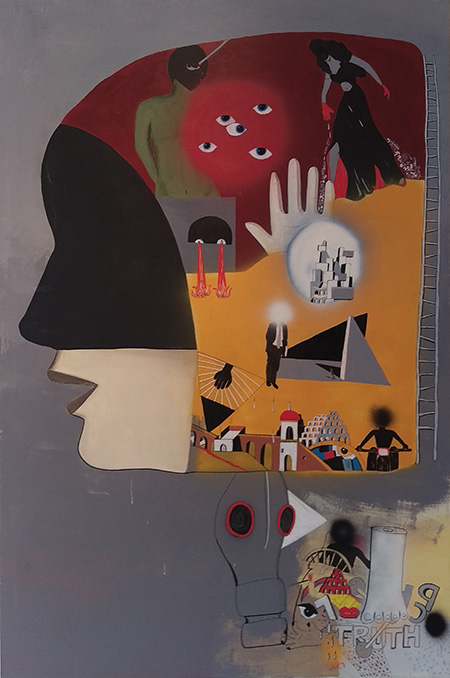 Indian-born Houston resident Rahul Mitra is acutely aware of the economic disparity in the U.S. and beyond, and his paintings, drawings and sculptures provide insight into what he thinks about the state of the world today. His work combines images borrowed from art history with illustrations of repression, violence, and protest. The detail is attention grabbing, and stylistically Mitra pays homage to surrealists such as Klee and de Chirico with his precisely drawn and painted figures, animals, objects, architectural renderings and more. Unlikely juxtapositions are presented in dreamscapes reminiscent of Ernst, Tanguy or Dali. The show’s title, "I Bury My Past So I Can Repeat It," draws attention to what he refers to as the “social and political Alzheimer’s” that characterizes the world today and results in little progress toward equity, peace or mitigating global warming.

“Ship of Sorrows” refers to a ship on the horizon, and is a reflection on colonization and repression. The landscape is filled with references to famous artworks and advances in civilization, including the arch, wheel and pyramid. The viewer may recognize figures from Picasso’s “Guernica” and Gauguin’s Tahitian paintings. In “Your Saviors Killed Your People & Built a City of Your Dreams,” a modernist city rises from the earth, which is a tomb of sorts filled with terrifying images of bodies and body parts, skulls and snakes, men in chains and women being violated. In “Penultimate Truth,” a woman’s head occupying most of the picture plane is filled with disturbing figures, such as a woman dressed in black wearing a mask and red gloves, a man with a glowing ball of light for a head, and a masked male with a laser beam shooting from his head. Floating beside him is a glowing red ball containing five eyes. This painting has been evolving over the past several years, and the artist notes that the present surface covers three more paintings below it. Truth is elusive, and this piece, along with others in this rewarding show, represent Mitra’s compromised hope for the survival of the human race.