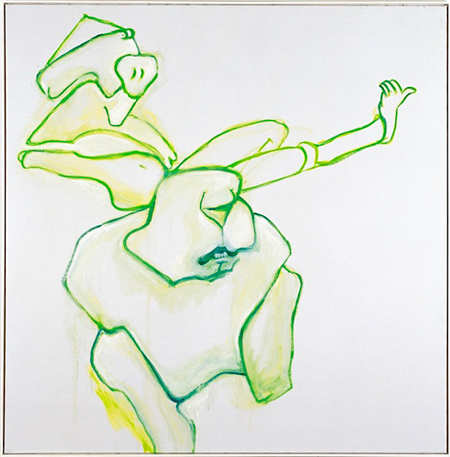 When the late artist Maria Lassnig (1919-2014) lived in New York City between 1968-1980, her art was considered “strange” and “morbid.” It didn’t fit in. However, in her home country of Austria, her New York years paid off. In 1980, Lassnig was offered a professorship at the Universität für Angewandte Kunst in Vienna, making her the first female professor of painting in a German-speaking university. There she founded Austria’s first department of animation, a genre she learned at the School of Visual Arts in New York. After building an exhibition resumé that included shows at the Stedelijk Museum in Amsterdam and Centre Pompidou in Paris, Lassnig was reintroduced to New York with a retrospective at MoMA PS1 in 2014. Only now is she being belatedly introduced to a Southern California audience.

Spread out over five galleries, all of her main creative phases, from early 1950s abstractions to her allegorical figurations to her introspective self-portraits are represented. One gains a good sense of Lassnig's impressive use of color and ability to visualize complex emotions. Her paintings engage through the interplay of vivaciousness, decay and dissociation. In “Sprachgitter” (1999), aquamarine, maroon and maize make up the biggest color plane, interspersed with a variety of subdued hues, sprinkled with dashes of bright green. We see a bald head with a bony face. Anxious and sad eyes stare out at us. A toothless mouth sprawls out through a dental prosthesis, telling us about the cruelty of time. “Woman and Man” (2007), another of her works from later years, suggests the withering relations between the genders. Only the green-bluish contours of two entangled figures appear on an otherwise white background. The pose recalls the twisted torsos in Francis Bacon’s “Triptych August