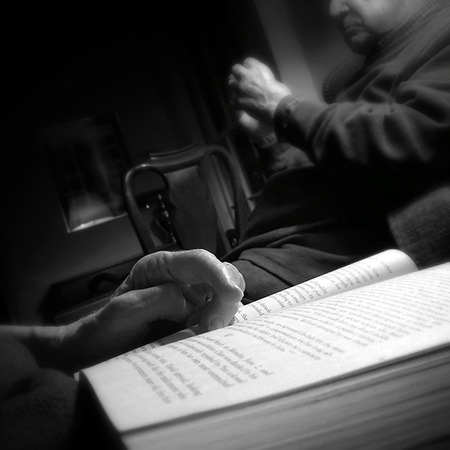 Patricia Lay-Dorsey, "Untitled," from the series "Tea for Two," 2015, photograph

Almost every night of their fifty-year marriage, photographer Patricia Lay-Dorsey’s husband played the classic 1925 standard, “Tea for Two” on the family piano, with Lay-Dorsey singing along. This nightly ritual provides the framework for Lay-Dorsey’s affectionate exhibition, titled after that song: the show is a lens through which to reflect on the couple’s half-century together. This is an agreeably incongruous commingling of decades-spanning subject matter and up-to-the-minute technology. Lay-Dorsey for the first time used an iPhone camera to record these quietly poignant images (all from 2015). We see the couple’s wedding photographs lovingly displayed on an end table, their fresh faces gazing out from the mid-1960s; fast-forward to the present and two images of her husband have him pondering the newspaper’s daily crossword puzzle in one, and getting dressed in another, endeavoring with some effort to put on his socks.

Lay-Dorsey, who is 74 and uses a motorized scooter to get around, has never shied from a series in which she portrays the warts-and-all realities of growing older. “Tea for Two” is especially tender in this regard, without ever dipping into treacle. The shots were taken at the couple’s Detroit home during the aftermath of a historic blizzard. A cold, glowing light suffuses the images, befitting this clear-eyed but elegiac glimpse of a couple in the winter of their years.