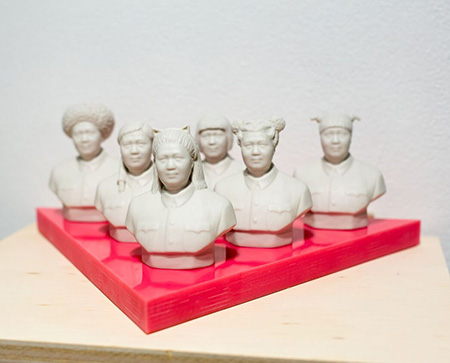 Jennifer Ling Datchuk’s work addresses her ongoing concern with identity in terms of race, culture and gender. Her own background totally informs her work. As the daughter of a Chinese mother who immigrated to the U.S. in the early 1970s and a Russian-Irish father, she always felt “in-between, an imposter, neither fully Chinese nor Caucasian.” When she was young, her family lived with her Chinese relatives in Brooklyn, but later they moved to Ohio to live with her father’s side of the family. Regardless of where she has lived, however, Datchuk has felt like an outsider. Her choice to study ceramics was due in part to its long history in China. All nine pieces in the show include some sort of porcelain, and most make reference to Asia, either through subject matter or materials. Six incorporate Asian human hair, which can mimic any texture or style and be dyed any color. In “Unlucky” for example, an Asian ponytail hanging from a string of porcelain beads has been bleached and dyed pink. For “Chinese Jump Rope,” Datchuk created a 46-inch-long rope of Chinese human hair. Although her primary medium is always ceramics, these sculptures also incorporate embroidery, photography and Plexiglas as well.

The title of the show, “Blackwork,” reflects Datchuk’s interest in blackwork embroidery — both its history and the medium itself. Blackwork is often referred to as “Spanish blackwork” because it was brought to England from Spain. It a type of embroidery using black thread dating back to the late 15th century, but according to some sources, it originated in North Africa and was brought to southern Spain by the Moors, “African history erased in the hands of white women,” Datchuk says. Despite many advances, women still are not viewed as equals in society, given equal opportunity to work or paid equally. “Gurl Power” addresses these issues. While doing a residency in Jingdezhen, China, she worked with a Buddha factory to make a traditional Buddha with children clustered around him that she received while still wet and therefore malleable. She molded and sculpted it, giving the boys what are considered girl’s hairstyles. After the piece was glazed and fired, she added ceramic decals to the children’s clothing, and on the back a large decal that says “Gurl Power” with the image of a dragon, which represents auspicious and potent powers in China. The use of porcelain calls up associations of “white” with fragility, beauty and innocence. Her personal history and internal conflict regarding her own identity continue to drive this multi-faceted work into the political arena.