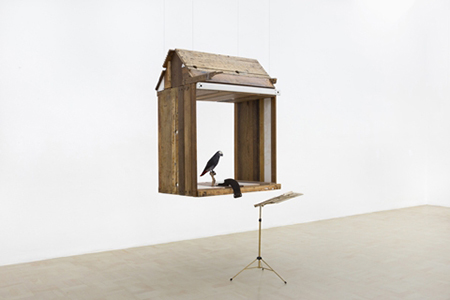 In Kemang Wa Lehulere’s “In All My Wildest Dreams,” the artist presents an array of multimedia works addressing the construction of histories, both in his home country of South Africa, and at large. Loaded, emotive media like handwritten letters, live plants, human hair and salvaged wood make for an exhibition filled with content that is more felt than read. In “One is too many, a thousand will never be enough,” a taxidermied African grey parrot is perched within a shelter made from reclaimed school desks. A set of American accent instructional cassettes is propped up before the bird, while the tapes’ audio envelopes the installation — a poignant reminder of the global pressure to conform to American Standard English. They suppress the auditory evidence of where one comes from.

By far the most potent work in the exhibition is “Echoes of Our Footsteps (A reenactment of a rehearsal),” video documentation of a performance that took place during the first few days of the exhibition in Chicago. In the video Wa Lehulere and fellow artist and actor Chuma Sopotela act out a script that Wa Lehulere wrote based solely upon his memories of having performed in the play “Echoes of Our Footsteps” many years ago. The artist’s subjective recollections result in a fragmented, nonlinear narrative, punctuated with several clear, visual vignettes from the original play’s themes of police violence and violence against women: a child recounts his mother’s rape; a witness describes a woman being burned alive. The structure of this performance parallels the tendency for our minds and our written histories to be imprinted by the most horrific events, and to forget the less sensational, but equally crucial things that lead to those circumstances. In a work of art, as in the news, we can know what happened; but often we do not really know how or why.