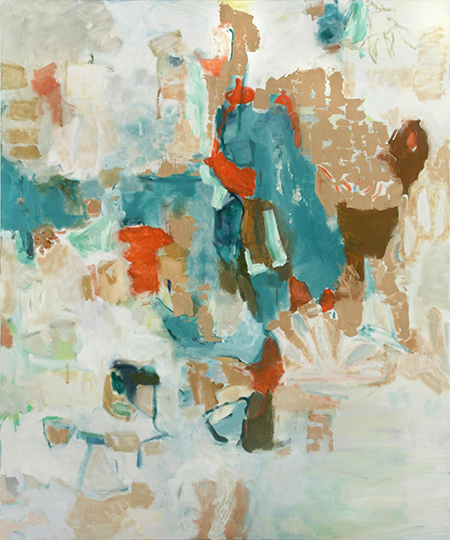 Fourteen colorful abstract paintings, mostly oils executed during the last decade, comprise the latest solo exhibition by Terrell James. A Houston native, James' thirty year career narrative visually reveals how she’s wrestled with the depiction of nature by abstracting from reality, composing abstract images that bear distant traces of their origins while becoming original, vibrant, works of art.  In a series of "Field Studies," James concentrates our attention on the center, leaving an un-worked border around the overlapping fields of color and shape. In the paintings, a fully realized all-over style is used to translate her experience of particular places, evoking memory and time.

In the main gallery two large canvases each occupy their own wall, "Tidal Threshold” (2010), and the immense "Sotol View” (2007), a 7 x 21 foot horizontal. Inspired by her visit to the Sotol View vista point in Big Bend National Park, this ambitious painting contends, in scale and vision, with Monet’s "Water Lilies." Instead of Giverny, the Texas landscape provides the source for a meditation on space, light and terrain that is rendered with a gentle palette. A touch of line deep in the background meanders along the surface, tracing the feint image of a canyon, framing a point of view the artist may have obtained to survey the site. The eye is easily absorbed among the ethereal yellow, purple and orange brushwork, whose free yet careful placement make the paintings’ imagery float above the ground, over the surface of the canvas itself, populated by tendrils of paint that derive from tall sotol cactus stalks.