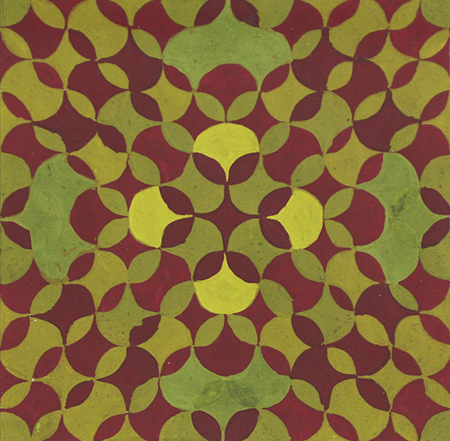 When David Richard Gallery was located in Santa Fe’s Railyard Arts District, the space was best-known for its exhibitions of Op Art from the 1960’s to the present. A move to Pacheco Street in 2015 marked a clear shift in the gallery’s direction. Historic works still hide in the back corners, but young, emerging artists have stormed its front galleries. Starting with a new wave of local art collectives and experimental projects immediately recast the program’s identity, and it’s still riding that momentum. A new exhibition of the Park Place Gallery artists represents an engaging confluence of the two curatorial approaches.

The artist-run gallery opened in lower Manhattan in 1962, and united a group of irascibles who would come to define the Op Art movement and elevate post-minimalism. Many of the space’s founding members had moved to New York from the West Coast, and they swiftly engaged with up-and-coming New Yorkers such as Sol LeWitt, Carl Andre, Eva Hesse and Joan Jonas. The gallery moved to SoHo in 1965 and closed two years later. “Park Place Gallery: Founders and Friends, Then and Now" features old and new work by lesser known core of founding members Dean Fleming, Edwin Ruda and Leo Valledor, along with contributions by a smattering of artists who were part of the Park Place circle. Young upstarts in Santa Fe ought to swing by to bask in the vibrational energy of a collective that has passed into the realm of legend. Perhaps Pacheco Street is the next SoHo.