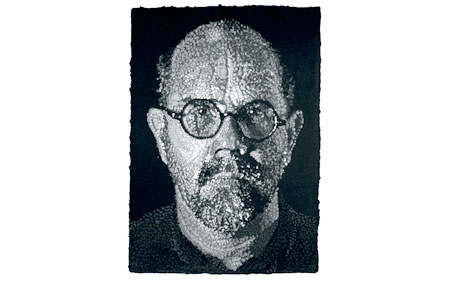 The enormous, excruciatingly detailed portraits of Chuck Close, or 'heads' as he refers to them, meticulously reference the topographical versus psychological - a specific order or checks, hatched lines, even fingerprints, morphing into form, color and line, all carefully balanced between figuration and abstraction. In 'Chuck Close Prints,' the first comprehensive survey emphasizing the artist's passionately collaborative nature and step-by-step methods, these heads also serve as insights into the artist's groundbreaking efforts in printmaking during the past three decades, typically utilizing the same sitter and using a multitude of techniques to produce markedly different results.

The fourteen proofs on display of 'Alex' (1993), which are based on an image of Close's friend, the painter Alex Katz, appear at first to be cold and distant, but build up to a warm, intense image that highlights Katz's engaging personality. The most awe-inspiring collaboration is the 113-color Japanese-style ukiyo-e woodcut print 'Emma' (2002). Taking master printer Yasu Shibata nearly three years to complete, viewers can delight in inspecting rarely seen tools of the process: the inked, intricate maple plywood blocks, which were successful in preserving the painting's spirit and, what Close calls the 'inappropriate color' of his image. Though the exhibit may demystify Close's creative process, it's almost as good as a behind-the-scenes visit to the studio of one of our most essential living artists.