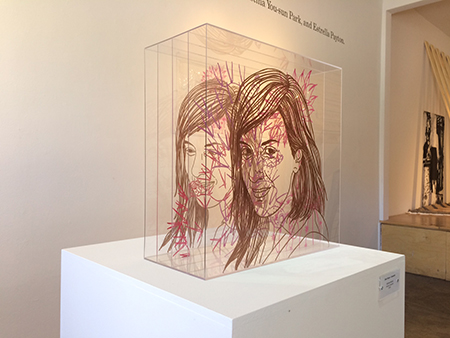 Gabriela Muñoz, from the series "Dark Horse" (2016), acrylic on acrylic. Courtesy of the artist

While artists grapple with whether and how to make statements about the current political climate in their work, three women have come together for a message-laden show called “Politics of Place.” They traverse such topics as female empowerment, immigration hurdles and presidential communication styles. A certain commander-in-chief’s Twitter account is the catalyst for Christina You-sun Park’s “Alternative Facts,” in which strips of Mylar cascade down the wall. Each strip bears Park’s handwriting, reproducing recent Presidential tweets to afford them more tangibility and scrutiny. Her other work is “Nevertheless, She Persisted,” based on the recent nomination hearings for Attorney General Jeff Sessions. Employing handwriting on Mylar and paper, the work juxtaposes Sen. Mitch McConnell’s infamous words “She Was Warned” directed at Sen. Elizabeth Warren, with an excerpt she was attempting to read on the floor of the Senate from Coretta Scott King’s 1986 letter denouncing Sessions.

Gabriela Muñoz addresses the undervaluing of women with a series of layered acrylic panels and molds. Line-drawings of three women from three generations are combined with drawings and molds of objects that represent the work they do. The series is called “Dark Horse” to signify that recognition for women’s work in all its variations does not come easily. Estrella Payton’s installation uses semi-circles of sand and salt, wooden planks, and a large, shadowy image of her grandmother to represent the hardships her relatives faced as immigrants. All the works exude a raw energy that makes them timely jumping-off points for political discussion, no matter where one stands.