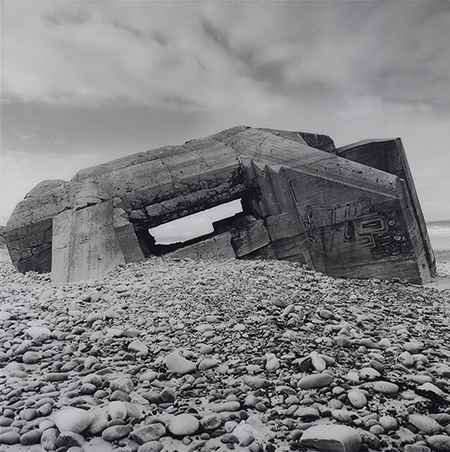 “Concrete Poetry, Words and Sounds in Graphic Space” explores the potential of the written word as a visual symbol as well as a unit of linguistic meaning. Addressing the eye as well as the ear, "Concrete Poetry" is as much at home on gallery walls as on the printed page. This exhibition focuses on experimental work, from the 1950’s through 1970. It features contributions in a variety of media by an international group of concrete poets, such as the Brazilian Augusto de Campos, the Scottish Ian Hamilton Finlay and other contemporaries, including the American Mary Ellen Solt. Working closely with artisanal typesetters and calligraphers, Solt created “Forsythia,” part of her series “Flowers in Concrete.” The poem, set against a bright yellow background, is made up of strings of letters, taken from the flowering bush's name. Curving upward from the bottom of the page, they bring to mind the forsythia’s branches and blooms.

In the early 1940’s, Adolf Hitler ordered forced laborers and prisoners of war to construct fortifications that he deemed impenetrable along the Normandy coast. Designed to protect against allied invasions in World War II, images of what remains of the chunky concrete bunkers that once signified Germany’s dominance over Europe reduce them to historical curiosities. They surround a video presentation examining the remains of the bunkers, all created by the British born, identical twin sisters, Jane and Louise Wilson. Tipped off their foundations after battling wind and waves for generations, the remains of the toppled structures are photographed from camera positions selected by the Wilsons to emphasize the structures' gradual surrender to the forces of nature that nibble away at them. The waves lap at "Casemate H667,” once used to shelter troops on Omaha Beach. “Casemate SK667” seems to sink into the rocky beachside. Ambient sounds of wind and waves pass through the gallery, emphasizing the transitional location of the structures between the land and sea, as suggested in the works' title, “Sealander."