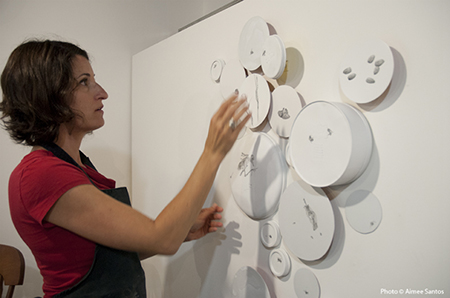 Expanding on her earlier “Symbiotic Crisis” and “Feed” series, the delicate, detailed and simply beautiful black and white works of “Not Just Bees” are diminutive in size and large in intent. Terry Arena takes as one of her main subjects the now well-documented plight of bees. Working in graphite on metal and other re-purposed materials, Arena uses a magnifying lens to create these ethereal and well-executed works. Many are hung in groups that stylistically represent the clusters in which bees themselves gather. Also on view is a sculptural installation featuring cloche glass jars that contain the subjects of her drawings. Arena captures the poignancy of her subject elegantly and elegiacally.