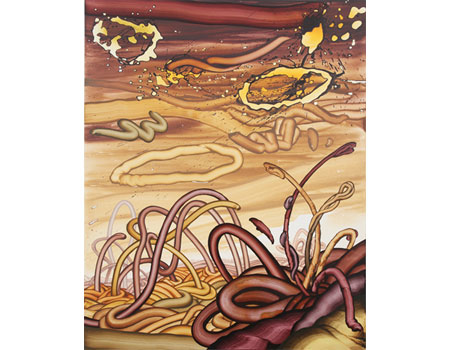 Nathan Redwood's masterful, liquid painting style is fully in effect in "Altered Atmospheres."  His spaghetti- and toothpaste-like striations delightfully pulse in fictional landscapes and interiors dotted with objects such as chairs, two-by-fours and recurring shovels. Despite the lusciously fluid brushwork and a sophisticated palette, the objects that dot Redwood's worlds often come off as goofy, quaint and/or a bit antiquated; one wonders if the paintings might be better if the landscapes were object-less - as is already the case with "Feelers" and "Into White."  As both works are from 2010, it's possible that images with less figuration are on the horizon.  "Into White," along with the "Reverse Option" and "Low Anthem," feature erased or whited-out splotches of space, an effective pictorial device that easily interacts with the ropy, fluid bands that Redwood so convincingly owns. Objects - vessels, chairs, tables - serve to set off the more abstracted gestures by contrast, and without which their effect would be less pronounced and less effective. The two-aforementioned forays suggest a more non-objective direction not only could flourish, but seems inevitable.