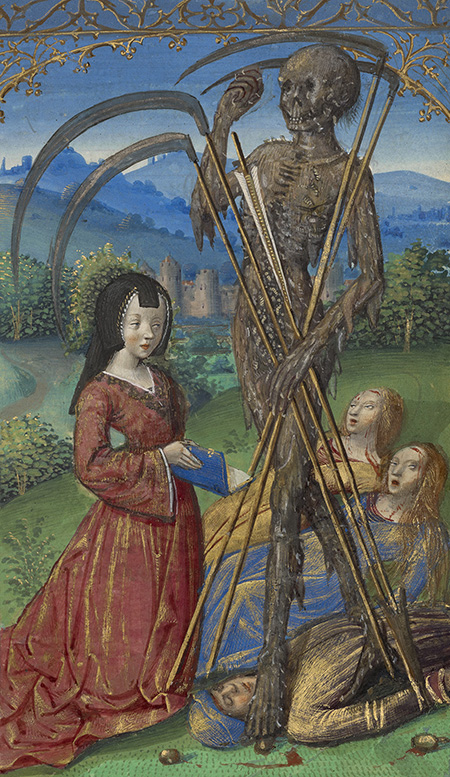 The Poncher Hours, “Denise Poncher before a Vision of Death,” ca. 1500, Paris, Master of the Chronique scandaleuse.  Courtesy the J. Paul Getty Museum.

Although women in the Middle Ages were not granted many of the same freedoms and rights enjoyed by women today, according to “Illuminating Women in the Medieval World,” women could expect a wide variety of experiences and opportunities depending on social class and religious circumstances. Through this expansive collection of over 20 intricately detailed illuminated manuscripts and prayer books, we can begin to understand the complex gender expectations of the age. With the dawn of bookmaking and literacy in Europe during this period, nuns were not only taught, but encouraged to read in order to better understand Christian teachings. These volumes included inspirational stories of biblical heroines and female saints. As Christian morality was a crucial part of Medieval society, women were expected to follow in the footsteps of these figures in their demure, yet strong-willed nature. The most popular of these archetypes, the Virgin Mary is ubiquitous in this exhibition, but we can see her strong influence on female literacy and morality in “Saint Anne Teaching the Virgin to Read” (c. 1430-40). This illustration, beyond the Biblical reference, represents the ideal mother-daughter relationship in this age and the importance of literacy for upper class women and nuns.

Royal women also played crucial political roles as negotiators and brides, as seen in Master of the Getty Froissart’s “The Marriage of Louis de Blois and Marie de France” (c. 1480-83). As the King of France’s niece, Marie contributed to the peace and stability of the throne by tying the families together. Lower and middle class women contributed by tending to the livestock, the fields, children, and also making sellable crafts. With other manuscripts featuring Eve, Mary Magdalene, The Whore of Babylon and Saint Catherine on display, this fascinating peek at women’s roles and role models is historically clarifying, if limited.