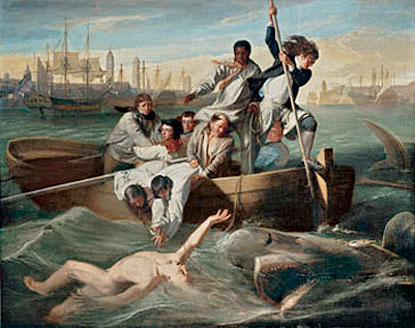 Those who evaluate genre paintings by awarding points solely to the most convincingly realistic imagery will miss the point of 'American Stories: Paintings of Everyday Life, 1765 - 1915,' a compilation of 75 narrative works dating from our pre-Revolutionary days until European modernism emerged in America with the advent of filmic storytelling. If you ake the time to analyze subject matter and compositional choices and decipher whose everyday life is being represented in visuals told by both well known and rarely exhibited artists, you will be rewarded with a better understanding of how such imagery colors our views of America's history.

Gilbert Stuart's 'Anna Dorothea Foster and Charlotte Anna Dick,' pictures two young women, beautifully attired in white and pastel pink, sheltered from worldly political concerns, at home with their needlework. Stuart elevates the most marriageable of the pair by indicating that she has progressed beyond sampler-style skills: her work is displayed on a tambour frame. John Singleton Copely's 'Paul Revere' brilliantly represents the heroic craftsman, laboring over a teapot, as a thoughtful, moral participant in insurrection.