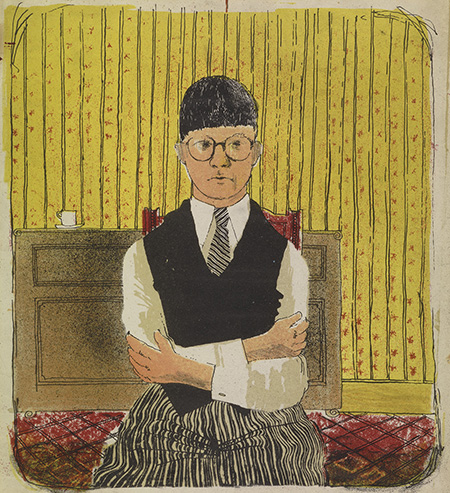 The versatile multi media artist David Hockney, a celebrated graduate of London’s Royal College of Art, has lived and worked primarily in the Los Angeles area for the last five decades. Viewers have the opportunity to examine the results of the British born artist’s curiosity about technique in “Happy Birthday, Mr. Hockney,” a two-part exhibition of rarely seen works that commemorates  the popular artist’s eightieth birthday. Declares Hockney, “I think mediums can turn you on, they can excite you: they always let you do something in a different way ... I like that.” On view are very personal self portraits made from each decade of Hockney’s career since the 1950’s. The earliest tend to be executed in traditional pencil, charcoal or watercolor. More recent works depicting the aging artist, feature Polaroids, iPad drawings and experimental and emotional composites.

“Pearblossom Hwy., 11-18th April 1986, #2,” an esteemed, but  rarely exhibited 700 piece Polaroid collage acquired by the Getty in 1997 and last shown in 2008, comes out of the closet as the main attraction. Hockney’s arid landscape, under patches of heavenly blue sky, was collected during a 3 day road trip to a desert site near Antelope Valley. It’s unique all-round view of a section of desert road littered with cans and bottles is worlds away from the lush, green landscapes that enveloped Hockney’ as a youth and which he often depicts on visits home. Readings of the nearly half dozen signs calling out “STOP” or “STOP AHEAD” which the artist has strategically planted alongside the narrowing roadway, could be interpreted as suggestions that Hockney is in sunny California to stay. However, other viewers may prefer to consider darker thematic paths, including those involving the environment or life itself.