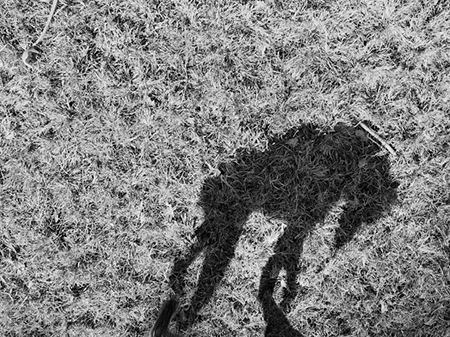 The paradox of Plato’s Cave — that what you see is a mere shadow of what is real — is central to Thomas Roma’s series, “Plato’s Dogs.” The artist, who heads the photography department at Columbia University, has visited a dog park in Brooklyn, New York, for many years, hoisting an eight-foot pole aloft to capture shadows of frolicking canines visually in absentia. The resulting prints (all black and white, all 11 by 14 inches, all 2011-2013) constitute a disarmingly earnest collective portrait of “man’s best friend.”

Due to the canted angle, the shadows often don’t actually look like dogs. In some compositions they resemble buffalo, wolves, cats, giraffes, or ballerinas pirouetting on the dry sand that backgrounds each composition. In some images you see fantastically conjoined mirror images of dogs playing, fetching balls and Frisbees, lunging at the camera, contours either elongated or diminished by the angle of the sun. Sometimes the breed is obvious from the silhouette, in others it’s obscured; yet in each the semblance seems to capture the essence not only of each breed but of each individual personality. One senses fidelity in each attentive gaze and ready stance.

In less sensitive hands, this thematic territory could easily become hackneyed, but Roma manages to keep the imagery this side of William Wegman cutesy, reminding us of the symbiotic relationship between image-capturer and the wholly unaware but meticulously attentive creatures with whom so many of us enrich our routines and hearts.