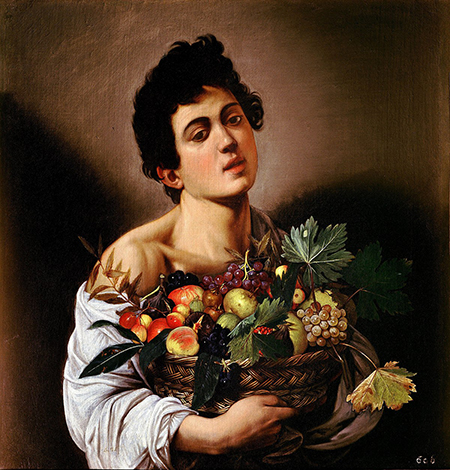 This Caravaggio exhibit of three paintings from the Villa Borghese in Rome is quite small, but considering that there are only a total of six Caravaggio paintings there, the opportunity to see half on this side of the world is not to be missed. French writer Emila Zola once said, “If I cannot overwhelm with my quality, I will overwhelm with my quantity.” If you apply Zola’s thought to the works by Michelangelo Merisi da Caravaggio, quantity is not necessary to impress. All of Caravaggio’s paintings show a considerable level of depth, skill and that unique style.

“Boy with a Basket of Fruit” (1593-1594) is one of his early works, depicting a young man in a feminine and seductive pose with his lips slightly open and his shoulder and collarbones exposed. The figure is staged as if a spotlight had projected a shadow on the wall. The young man carries a basket filled with ripe fruits - grapes, apples, pomegranate, pears, wine leaves and a peach that is as red as the blush on his cheeks. The ripe fruit underlines the boy’s entrance into adulthood, where he will eventually lose some of his effeminacy as fruit loses its fullness.

“Saint Jerome” (1605) presents the supposedly bad-tempered Scripture scholar and “Vulgate” author deep in thought with a skull facing him, as if he’s trying to distract himself from the awareness of his mortality. The third painting, titled “David with the Head of Goliath” (1610), was created towards the end of Caravaggio’s short life and career. It also embraces the subject death, but here in a more violent setup. We see the young shepherd with a sword, holding the giant’s decapitated head in his hand, looking compassionately yet dreadfully at his victim