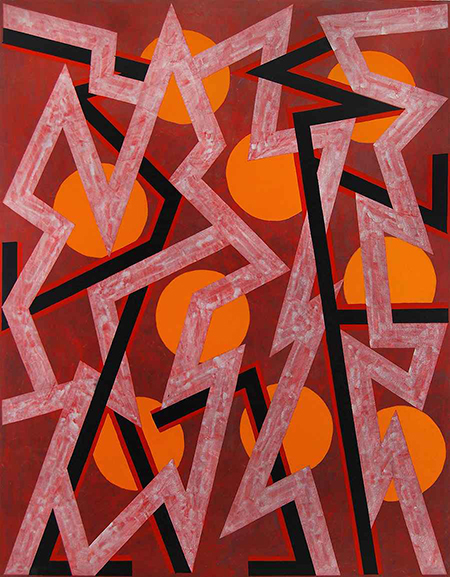 Serving as a fitting tribute to the late Ed Mieczkowski, who passed away in June of 2017, Vibrations of the Eye, Mind and Soul represents a stunning and diverse collection of work by one of the pioneers of the Op and Geometric Art movements. Born in Pittsburgh in 1929, and later co-founding the1960s Anonima group, which eschewed commercial recognition and embraced explorations of color and geometry, Mieczkowski taught at several academic institutions, and later left Anonima to focus on his painting.

Drawing inspiration from a broad range of subjects –from rustbelt landscapes to biotechnology—Mieczkowski’s work is almost mathematically precise. Yet his lively brushwork and the organic materials used to create his three-dimensional pieces provide a joyful expressiveness. Vibrations of the Eye, Mind and Soul represents several decades of work. The earliest pieces, from the 1960s are some of the simplest, yet the most striking of the group. Works like Anon and Stairs, from 1961 and 1967 respectively, use monochromatic or slight gradation of hues and crisp, clean lines to explore geometric forms and their visual effects on the eye. More recent works, like Fanfare and Elysian Fields, both from 2007, also explore color gradation and geometry, but in brightly colored exuberant patterns of shape and light. The collection incorporates several sculptural pieces, including Frank Lloyd (1986) and Small North (1987), which are architectural and innovative in their use of color and layers, deploying alphabetic-like patterns that change and shift from each perspective.

In 2012, Mieczkowski told an interviewer, “I wanted to move on at a swifter pace and make myself heard as a painter.” Vibrations of the Eye, Mind and Soul proves that not only was his mission accomplished, but that his reputation as an innovator and independent thinker has been cemented. While many in the art world mourn the loss of Ed Mieczkowski, we can appreciate his influence in this expansive celebration of his work.