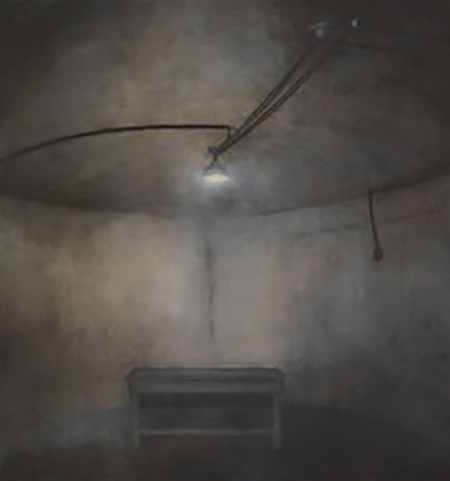 Natalie Arnoldi’s paintings appear to be of mundane, though ominously large, darkened, vault-like rooms that could exist anywhere. But in fact, they serve as haunted relics of one of history’s most brutal periods, Arnoldi did not originally intend to create a series on the holocaust. But one of her paintings of a railroad leading into a darkened mist reminded one of her viewers of a relative’s experience arriving on a train at Auschwitz. What began as a completely anonymous landscape turned into an interpretation of a very real and historic place. This set Arnoldi off on an exploration of several locations throughout various Nazi concentration and death camps. Though never having visited any of the sites before creating the paintings in “This Happened Here,” Arnoldi effectively connects to the pathos as well as the horror of that history, her works capturing both the place and its past.

A shower room, torture chamber, and other ominous scenes of the holocaust comprise the exhibition’s subject matter. Though no figures are present, the imprint of the horrors that took place linger like fog on a road at night. The paintings are certainly unsettling on their own, but knowing the intention and inspiration of the work makes them nightmarish. As unpleasant as this is, the paintings are stunning for their exceptionally haunting effect. Most stand taller than an average-sized person, and they maintain a similar color palette of murky browns and grays. The lines of the architecture are sharp and simple, and the ghost-like patches of what appears as a white fog linger, as if the rooms themselves are forced to continue to live the tragedy of events that took place not so long ago. And while your emotions may take over while viewing this exhibition, you won’t be able to ignore the talent of the artist who created it.