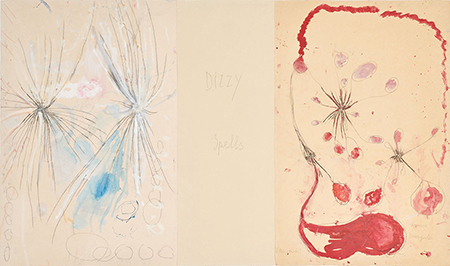 Although Louise Bourgeois (1911-2010) may be best known for her iconic spider sculptures and her many sexualized sculptural objects and installations, the monumental prints that she produced while in her late nineties reveal the work of an artist whose mastery never waned as she became older. In these mixed-media prints, some of which span multiple panels, images and text combine to create what reads like a deeply personal diary writ on a cinematic scale. In her series "The Red Sky" and other works produced from 2007-2009, the dominant color is red, a symbolic reference to blood and violence, life and death, and emotional states such as shame, jealousy, and depression.

Prints titled "The Fear is Inside You!!!,” "Have a Little Courage" and "This Need," where Bourgeois' characteristic biomorphic and cellular forms alternate with handwritten text passages, are especially gripping. In each example, aesthetically forceful abstract symbols and writing pulsate with a vibrant energy conveyed through steady yet rhythmic undulating lines and subtle modulations in density and texture. With her uncanny ability to translate states such as dizziness or fear into convincing visual form, Bourgeois demonstrates, with colossal bravura, the sheer beauty of wisdom that has been finely tuned with age.