“In Their Own Form”
Museum of Contemporary Photography, Chicago, Illinois
Recommendation by Robin Dluzen 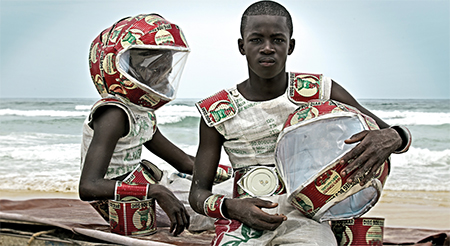 In “In Their Own Form: Contemporary Photography + Afrofuturism,” portraiture takes center stage, with images of self-representation in dialogues separate from Western media’s depictions of African Americans, historically fraught with pain, prejudice and othering. With the Afrofuturist tradition of exploring African and African Diaspora history using technology and culture as a contextual lens, the artists in this exhibition compound the realities of traumatic pasts and presents with imaginary worlds and poetic symbolism.

South African artist Mohau Modisakeng’s three-channel video, “Passage” is one of the show’s most potent pieces. Three white boats, each with a single occupant, are in the centers of the screens, loaded with signifiers such as heavy, black clothes, a parasol and a long whip referencing colonialism and the slave trade. During the short film, the boats slowly sink, and a range of emotions, from acceptance to heart-wrenching panic, ripple through the cast. “Passage” does what so many of the works in “In Their Own Form” aspire to do: illuminate shared experience through an intensely personal visual language.