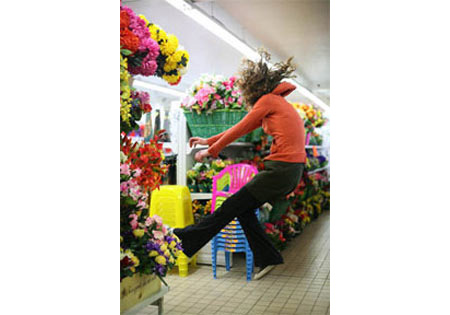 “Hyper,” the title of Denis Darzacq’s most recent suite of photographs, features a mélange of young men and women floating and/or careening in the aisles of Parisian-area hypermarchés. One wouldn’t be off, however, if you were to interpret the figures as spazzing out – literally being hyper – amidst the onslaught of consumer products. Selections from an earlier body of work - the series “La Chute” - is also included. In this suite, young men are caught mid-flight out in the streets, bearing a strong association to Parkour, the gymnastics-cum-urban-obstacle-course sport best known and practiced in France. In fact, in both series the subjects are street dancers.

The elegance with which Darzacq captures the subjects mid-float, as if falling to the supermarket floor, or flying through its aisles, offsets the cloying pastel palette of objects of consumer desire. To whatever extent “Hyper” is a comment on the insignificance of working-class banlieue immigrant communities in the face of Paris’ unforgiving and unrelenting consumerist society, the balletic freeze-frames of the dancers is a more-than-worthy formal feat in itself.