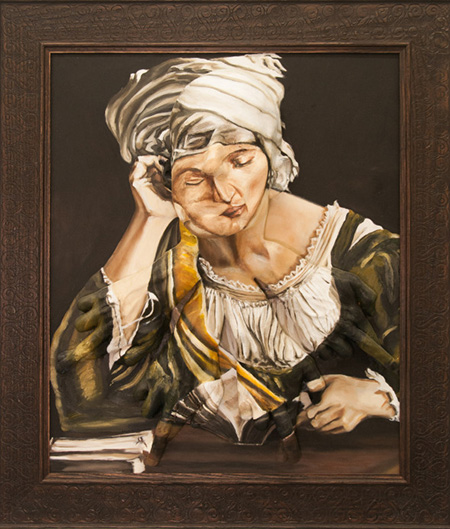 The initial impression of Chadwick Gray and Laura Spector’s collaborative paintings is of art historical portraits viewed through a “funhouse mirror” that distorts them dramatically. Large areas of each piece are painted realistically, but the faces may have multiple eyes and mouths, and the bodies are contorted. In one piece, a ghostly male profile lurks behind the face of a Renaissance woman. Clarity comes when one realizes that Spector is recreating historical paintings using Gray’s naked body as her canvas. For years, Spector has painted directly on Gray’s body, requiring him to remain immobile for hours. For some of the work in this show, Spector has utilized additional models, as well as body casts, to paint her Renaissance-era portraits.

The majority of the works are high-resolution color photographs of Spector’s paintings. A number are recreations of paintings stolen by the Nazis during World War II. The pair has been traveling internationally for years in search of lost or destroyed paintings taken from museums by the Nazis. For this show, they focused on a set of missing (presumed destroyed) paintings from the collection of the Johann Friedrich Danniell Museum in Salzwedel, Germany. When the museum’s curator showed them photographs of unrecovered stolen art, they were inspired to use the images in what became the present show, “Museum Anatomy—The German Works.” Some of the referenced works are portraits of relatively unknown people by minor artists. Others are copies of famous works of art destroyed by bombs during the war, such as “Reading Girl” is based on a painting by Domenico Fetti completed in the early 17th century. Still others are inspired by major surviving works, such as “Portrait of Marie de Medici” by Peter Paul Rubens now in the collection of the Louvre.

Several earlier pieces are paintings on plaster casts of body parts, some of which have been attached to two-dimensional paintings, rendering the final versions three-dimensional. “Untitled (Madonna and Child),” presumed after Leonardo da Vinci, is an oil and plaster on oak panel in an ornate frame. There are recreations of paintings by other Renaissance masters such as Lucas Cranach the Elder and Hugo Van Der Goes. Spector uses Chadwick’s anatomy and other models to emphasize certain elements of the paintings. In “Portrait of Mary Milendonck,” the subject’s eyes, nose, and mouth are painted on top of the model’s face at contrasting angles, and the subject’s hand and arm are lined up with those of the model. The paintings challenge us to determine where the model’s body ends and the subject begins. While the results of Spector and Chadwick’s creative techniques are not always visually appealing, they are expertly executed and exceptionally original.