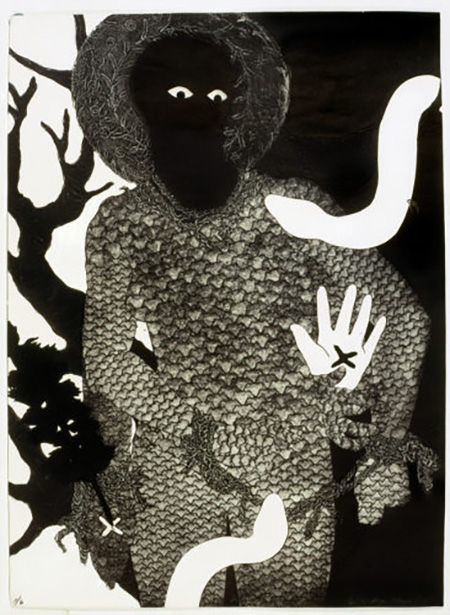 The power of myth exudes forcefully from Belkis Ayón’s body of work, which culls characters, narratives, and symbols from a secret society carried to Cuba by African slaves during the early 19th century. Only men are initiated into the Abakuá Secret Society, which is part religion and part fraternal organization, although its mythology includes a woman named Sikán who figures prominently in the artist’s work. This retrospective reveals Ayón’s careful study of this mythology, and her facility for moving deftly within and beyond it.

Over time, Ayón moves from representing key elements of the Abakuá myth to incorporating symbolism from other religions such as Catholicism. She creates not only a fish that’s central to the secret society’s lore, but human figures covered in fish scales. She begins to blur the boundary between Sikán’s form and her own. In doing so, her images beckon us to consider the shifting nature of personal, social, and political myth. For Belkis, the context was Cuban angst over the demise of European-style socialism. Today, the context is growing discontent with a globalist world order and the crumbling myths of patriarchy.

Text panels effectively guide museum-goers through the exhibition, and videos along the way provide insights into the artist’s personality and art practice. One shows Ayón working in the studio, using her signature collography technique in which she cut patterns from materials with various textures, then glues them to a cardboard plate before inking the surface and sending it through the press to produce sharp delineations of black, white, and myriad shades of grey. Often, she creates larger works by connecting several panels, as with an 18-part piece titled “Pa’ que me quieras por siempre (To Make You Love Me Forever).” Its horizontal bend challenges the idea that prints are always two-dimensional, the same way Ayón’s work liberates us to constantly question and adapt our own mythologies.