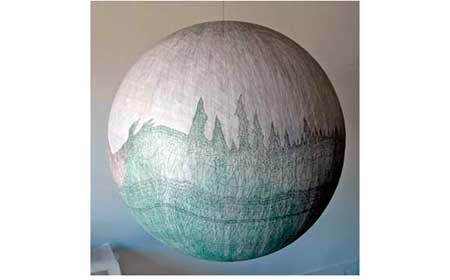 Russell Crotty, 'Just Up The Coast,' 2010, ink and gouache on paper on fiberglass sphere

Russell Crotty is known for his night-sky drawings on Japanese paper that are laminated onto cast spheres of Lucite a couple of feet in diameter. Based on notebook sketches made by the artist at his Malibu hillside observatory (before a recent fire), these gloriously low-tech ballpoint pen celestial globes have an antiquarian aspect, evoking Victorian amateur scientists. With their comets, stars, constellations, galaxies, and nebulae rendered above silhouetted horizon lines (think of Starry Night mapped onto a globe), they also suggest the domed projection screens of planetariums, doubled, miniaturized and mapped onto convex instead of concave surfaces. The spheres thus become tiny planets reflective of their astronomical surroundings. When installed, suspended, en masse, they create miniature universes, with viewers becoming free-floating extraterrestrial explorers, roving eyeballs able to zoom in and out at will, or, by metaphoric extension, abstracted heads containing vast interior worlds. "Just Up the Coast" and "The Cape" on view here, are partially covered with cryptic graffiti or interior-monologue text (e.g., "up the coast from the amiable ganja town") that are satisfying and surprising meldings of science and poetry.

More problematic are Crotty's surf-themed works. The intrepid astronomer is also a dedicated surfer, and his participation in both activities and subcultures is clearly crucial to his art, even if the results in the latter case are not very accessible to outsiders. "Surf Drawing Blue" is a wall-sized drawing on paper composed of thousands of sketches of waves and tiny surfers; gridded into tiny cells, it suggests film strips, or flip-book animations, and the stylized waves suggest eyes seen from the side. Twenty-seven full-sheet watercolors memorialize surf meccas like Big Rock, North Wall and Camel Rock, and eleven "California Homegrounds" sketchbooks commemorate Evergreen Dream, No Trogs and Celtic Dream, to cite three examples. Two mammoth tomes, "Field Guide to Selected California Surf Breaks" and "A Seascape Portfolio," evoke the maps drawn by early explorers, albeit provided with data overlays on mylar. Surfers are sure to get the allusions; innocent landlubbers will prefer gravitating to the celestial spheres.