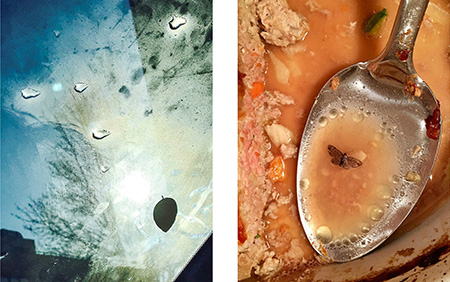 Five months in the lives — and cellphones — of two artists, both of them pregnant: that’s the premise of “Talking Pictures,” a collaboration between Athens, Georgia-based Irina Rozovsky and Southern California-based Manjari Sharma. In late 2016 and early 2017 the artists, participating in a project sponsored by the Metropolitan Museum of Art, engaged in a call-and-response digital dialogue. They sent one another cellphone pictures of their daily lives, ultimately resulting in a grouping of 122 photographs, 64 of which are included here. Displayed chronologically, the images at first hone in on the artists’ everyday lives — watching Donald Trump’s inauguration on television, attending the Women’s March the next day, shoveling snow after a winter storm. But as their pregnancies progress, the photos become more symbolic.

Fruits begin to appear: a grapefruit, a pineapple, a beet, a watermelon counterposed against a swollen belly. Water imagery proliferates in pools, showers, and sinks, enveloping bodies, nurturing things that grow. Even a diminutive moth that has strayed into a bowl of soup reads as a metaphor: a tiny life form suspended in a quasi-amniotic broth. The show ends with the hand of Rozovsky’s baby reaching out of swaddled blankets, and Sharma holding her newborn atop bloodied hospital bedding. It’s a poignant, bracingly visceral conclusion to an intimate pictorial conversation.