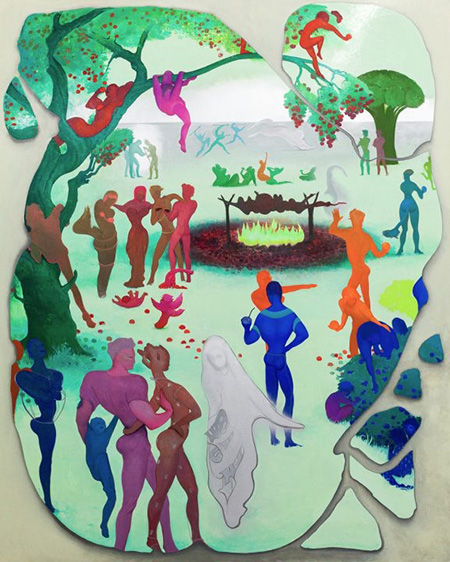 Inka Essenhigh’s paintings in “Uchronia” are accompanied with placards. The works’ titles are assigned dates that are decades to hundreds of years in the future; paragraphs of didactics detail the subject matter of each as if decoding the culture of a society long gone. The main gallery functions as a future museum with an imagined history. Essenhigh’s signature blend of the familiar and the surreal in fables and narratives feel as grounded in reality as they are utterly fantastical.

The history of “Uchronia” is based on a post-global warming society, whose values have their roots in trends that are familiar right now. The common obsession with houseplants is depicted in the lavish, Art Nouveau-ish “Living room, 2600 CE.” Our preoccupation with where our food is sourced is humorously amplified in “welcome to the Gather-n-Hunt, a family restaurant, 3500 CE,” not a white linen establishment, but a setting in which patrons are seen to be fetching their meals directly from the environment. Throughout these works the people exist in effortless harmony with nature thanks to the aid of so-called “climate engineering.” Indeed much of Essenhigh’s “Uchronia” feels idyllic.

However, an installation of paintings rendered as if they were chunks of busted frescoes titled “Fragments from a nature cult, 2087 CE” suggests that all is not as it seems. Floral forms dominate the broken landscapes and, unlike the other works in the exhibition, the only human forms are the remnants of a foot, a hand, or a red-lipped mouth. In its final sentence of the placard identifies the cult as serving a “goddess figure, her image now lost after the cult’s icons were defaced,” implying a misogyny that is clearly intended to hit close to home. Though “Uchronia” is in essence a science fiction narrative, the manner in which the artist has constructed this “history” prompts us to consider the real discord that could be written out of our own.