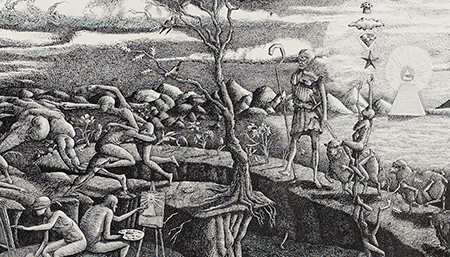 Three of Daniel Heimbinder’s monumental ink and watercolor drawings fill the walls of the front gallery. That’s the entire show, and it’s more than enough. Each work is more than eight feet across, all extraordinarily detailed figurative and imaginary landscapes that represent the culmination of a narrative continuum. The earliest, “So It Was,” dates back to 2012, when the artist was focusing on ancient texts, which included the Bible and Greek and Roman writings. In the second, “So It Goes” (2015), Heimbinder explores these investigations and their dramatic consequences further. In the final piece, this year’s yet to be completed “So It Will Be”, he chronicles civilization coming undone. Countless sub-plots involving hundreds of nude figures interacting with one another, as well as with monstrous animals and grotesque plants, comprise a nightmarish phantasmagoria.

Though each of these drawings stands on their own, they were created to be seen together. Their titles were inspired by the phrase “So it goes,” used repeatedly in Kurt Vonnegut’s “Slaughterhouse-Five” every time death is mentioned, regardless of the cause or circumstances. Like Vonnegut, the Dadaists and the Existentialists, Heimbinder references the absurd nature of human existence, despite religion or philosophy’s attempts to make sense of it.

Tapping into humanity’s deepest fears by giving free rein to his imagination gave rise to this apocalyptic vision. In the earliest of the trio, “So It Was,” Heimbinder depicts a landscape anchored his version of the Tower of Babel. In the lower right are two artists working at their easels; the one on the left is blindfolded, while the other paints the Eye of Providence on the horizon. The Eye is part of the Great Seal of the U.S. and appears on the one-dollar bill. Biblical references include a shepherd with his flock, with men clinging to the undersides of the sheep, only their arms and legs visible. In the lower left is a pile of bodies reminiscent of the victims of Nazi extermination camps or Renaissance depictions of hell. “So It Goes” depicts a city collapsing in the midst of a great flood, with buildings overturned and people trying to flee. A group of men are toppling an equestrian statue, while a larger-than-life figure quietly plays chess. Also collapsing amid the devastation is the pyramid with the Eye of God.

The elements of “So It Will Be” float freely in space. Some are carried over from the earlier drawings — the equestrian statue, the Eye of God, the shepherd — along with many new ones, including an oblique reference to the assassination of JFK. Heimbinder reinvents and reimagines a multitude of myths and symbols to the point of information overload. What we come away with is an overwhelming sense of dystopia. These darkly satirical drawings offer little in the way of hope, but they do provide a fascinating look at Heimbinder's process and viewpoint.