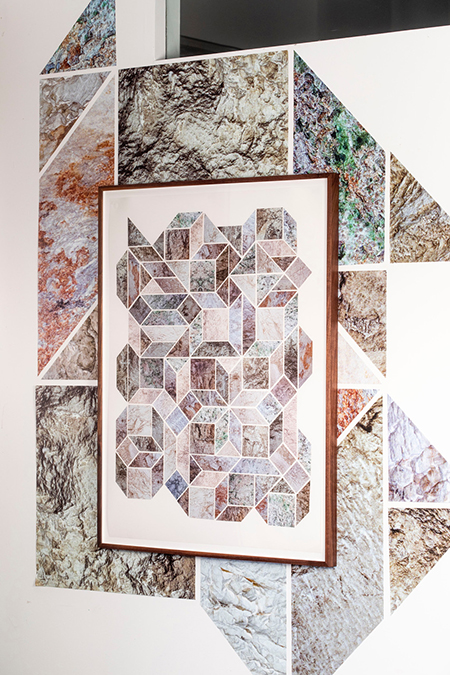 A single motif binds the works of Assaf Evron: the nature-inspired “meander,” a decorative aesthetic found across cultures and throughout history. “Untitled (Zedekiah’s Cave),” the title of both a custom printed wallpaper installation and a series of similarly collaged and framed works on paper, is the most powerful of the large scale installations. In it, the artist has taken closeup images of the limestone traditionally used for building in Jerusalem. It’s a material that is steeped with meaning and historical connections to the Old Testament, to the Freemasons, and to the current Muslim Quarter of the city under which this quarry lies.

Evron has cut these large prints into geometric shapes, reassembling them on the gallery wall in an immense approximation of the “meander.” The artist’s simple gesture, of employing this ancient stone for a construction informed by his own intentions, is a profound analogy for understanding such a loaded site. In “Untitled (Zedekiah’s Cave),” Evron provides perspective, the distance necessary to reconsider notions of nature and culture, highlighting the role that mankind’s methods and purposes take in forming our perception of place.