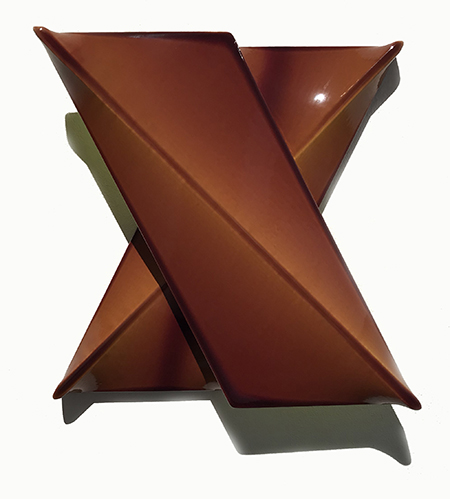 In the tradition of the Hungarian neo-avant-garde during the 1960s and 1970s, Budapest-based artist Árpád Forgó works within an abstract geometric aesthetic. His luminous shaped canvases investigate perception and color shifts as the viewer moves in relation to the pieces. Forgó left the world of two-dimensional painting years ago as his concerns shifted more toward mass and the physicality of a piece. He arrived at the current sculptural paintings, which he refers to as “spatial constructions.” These meticulous paintings are based on a modular system of interlocking triangles and parallelograms presented in pairs in this show, hence the title “Colliding Parallels.”

Forgó’s paintings mesmerize with smooth and lustrous surfaces that are the result of numerous layers of acrylic built up and polished until they exhibit both depth of color and transient surface effects. Color theory, color relationships and the nature of materials were all areas of focus at last year’s Bauhaus Centenary exhibition at the Ludwig and Vasarely museums in Budapest. Forgó’s work, which was included in the exhibition, aptly reflects those influences. His ongoing experimentation with light and movement seeks to engage us on a multisensory level. He also incorporates elements of op art and kinetic art, particularly shifting chromatic structures and the illusion of motion lends his work an interactive dimension. These gleaming paintings range from bright orange and blue to deep purple and brick red. Also included are studies in black, in white, and in pastels that transition from pale green to lavender to shades of blue. In some of the pieces, Forgó utilizes the backs of the paintings to cast colored shadows on the wall that add yet another dimension. Conceptually and formally complex as they are, his works remain accessible due to their many seductive and engaging qualities.