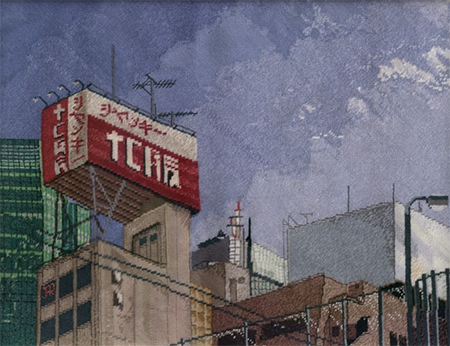 Jacquelyn Royal’s landscape needlepoints, titled “The New Police,” center on graffiti in order to explore the authenticity of mark making and the record it leaves. Comprised of stitched panels between 15 by 18 inches (largest) and 4 by 7 inches (smallest), these twelve needlepoints feel especially intimate. This is not only due to their immediate sense of materiality and labor, but also the meticulous translation of large-scale graffiti gestures into fine uniform stitches. A sense of humor pervades the show. In “Chicago 1” (2009) two gendered hotdog figures are framed in diamonds that interrupt the horizon, as though mounted to a corrugated fence in the background. An expertly rendered telephone pole in the top right-hand corner stands behind this fence, grounding the otherwise surreal figures in realism.

Throughout these works, pictured walls are bestowed with equal interest. “Fort Greene” (2020) captures layers of unsanctioned, multi-authored graffiti on a brick facade whose windows have been visibly sealed by cinderblocks. Royal’s equal treatment of surface and signature suggests that the idiosyncratic and often ephemeral mark of an individual is as relevant as its supporting architecture. Standout works are “Tokyo 1” (2009) and “Berlin 2” (2017). Both accentuate Royal’s skill at representation via buildings, plants, clouds, surface textures, and ground, seamlessly contextualizing the intrusion of text so that the final image reads almost like a 1990s-era video game. “Tokyo 1” is the only work in the show that focuses on an advertisement instead of graffiti, raising further questions about the difference between logos and artistic branding. Beyond the satisfaction of faithful reproduction and craft, “The New Police” teases questions about gender, material, and mark making. Royal’s stitched picture plane applies canonical inquiries of abstract painting to urban graffiti — two historically male-driven mediums recontextualized by needlepoint. Her technique digests the efforts of grand and defiant mark making through the modest but laborious stitch. This stitch thus establishes a picture-making unit that simultaneously documents and undoes the gestures it captures.