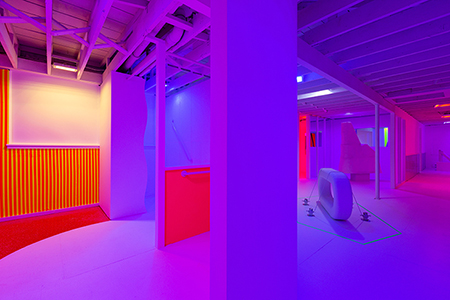 The extensive, immersive installation, “Energy Drink,” by the artist team Brian Sanchez and Neon Saltwater presents a number of possible interpretations: a gay dystopian environment for a “happy” couple; a hallucinatory fun house revolving around domestic symbols in a heightened chromatic wrap-around setting; or discrete activity areas for urbanites who must have access to gyms, spas, art galleries, sculpture studios, gay bars and lounges. Filling the entire second floor of the gallery — a repurposing of the first International Style building dedicated as a medical clinic in Seattle — “Energy Drink” is a surprising descendent of the Light and Space Movement from Southern California, especially James Turrell, and of New York minimalist Dan Flavin.

Instead of a meditative, chapel-like setting, Sanchez, an abstract painter who has also shown in San Francisco, Los Angeles and Tokyo, and Saltwater, an art director with clients like Barney’s New York and Starbucks, combined their talents to create a hushed lay-out of “rooms” that are identified by the activities that occur within them. Examples here are their version of a gym, with its weight-lifting bench; and a bedroom, with its absurdly large double bed which becomes a giant flat sculpture bathed in pink, orange, blue and green light. Like a rainbow flag of Gay Liberation, “Energy Drink” was enormously popular when it debuted last year, and was afforded an extended run due to the pandemic. The location in Seattle’s premier gay neighborhood, Capitol Hill, with its many bars and restaurants, contributes to visitors’ pleasure as they wandered through the darkened, but garishly lit, rooms. As if exploring a private home without the owners present, “Energy Drink” also parodies the insane real estate market in Seattle. Anything and everything is available for residents as rents climb alarmingly and drive out groups like the historic gay population on the Hill.

Is it possible for such an ornate and candy-colored environment to have a political dimension by calling attention to precarious living situations of urban gays in Seattle? On one level, the possibility of abstraction to carry any content intensifies discussion of the collaboration. For example, the pink punching bag could be read as a weapon or defensive object. On another level, the off-kilter environment, recalling a silent gay disco, spoofs the seriousness of Robert Irwin and Turrell, offering instead glowing lights devoid of spiritual resonance. Fizzy and funny, “Energy Drink” seduces us with its inviting, mysterious corners. A photographic blow-up of a stuffed toy animal may allude to young gays as “cubs,” in search of older “bears.” A few steps away, two rectangular benches suggest seating in a gay steam bath. Across the street from the gallery is the site where the city’s oldest gay sauna, Crystal Steam Baths, existed until the entire block was razed to make way for one of the Swedish Hospital’s parking structures. With Seattle’s history of site-related public art, such an allusion is inescapable.

Sanchez’s hard-edge abstract paintings are hung in various places. Thus, modernism has become a source for satire, too, as Sanchez and Saltwater riff on its requirements of simplicity, chromatic purity and a spiritual aura. Far from spiritual, “Energy Drink” is closer to Pop art, like the furnished-room-size installations of Andrea Zittel or early Claes Oldenburg.

Saltwater’s lighting design creates a seamless, flowing path throughout, highlighting sculptural objects and furniture, and throbbing with overlapping orange, purple and acid green pools of light. No one would want to live in such an interior: it has to be an anti-paradigm of sorts, a commentary on the special struggles and conflicts inherent among gay couples, so stressed are they by social issues and economic pressures. The fantasy apartment should be a safe space, but is quite public. Viewers are unwitting voyeurs, deliciously drawn to participate in actions that comprise a vicarious aesthetics of art, design and sex, redefining sculpture while reinforcing its central core of three-dimensional reality.