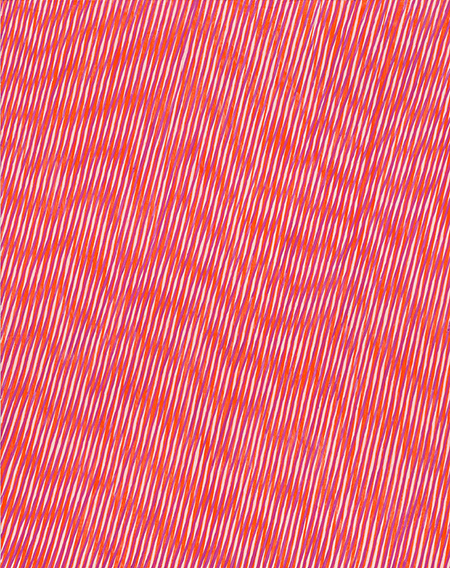 Matisse famously remarked that he wished to paint pictures that would refresh weary businessmen. If few artists would dare make such a baldly hedonistic claim in today’s politically charged climate, the need for works of optical pleasure, and, yes, intellectual discipline remains, whatever fresh hells, as Dorothy Parker put it, are loosed upon us.

Mel Prest’s “Color Unfolding” exhibition includes sixteen striking abstract acrylic on panel paintings that are composed of stripes. If the overlaid stripes initially suggest the precisionist Op Art paintings of Bridget Riley or Victor Vasarely, Prest takes a more improvisatory route, eschewing preparatory sketches and the hard-edge abstractionist’s masking tape and instead developing her imagery through paint application, creating the innumerable stripes by hand, so that the slight deviations from machine precision cause the works to breathe visually, even organically. This invites the sympathetic viewer in. The overlapping stripes, sometimes semi-opaque and partially transparent, generate moiré pattens, which suggest transparent gridded planes located in three-dimensional space.

Prest also takes advantage of media developed since the 1960s and 1970s, adding mica flakes, interference pigments (that change color depending on the angle from which they are viewed) and phosphorescent acrylic paint to provide, respectively, sparkle and modulation in daylight illumination and a gentle glow under ultraviolet light. Prest’s interest in nature and natural phenomena (wind, water, penumbras, sun dogs) is never explicit in the works, but never absent. As with astronomy or ornithology, the subjects are there if you know how to look.

Thirteen square format paintings ranging in size from five to 60 inches square are accompanied by two 22 by 28 inch vertical rectangles and a multi-panel piece, “Rainbow Weather Ladder,” composed of two vertical rows of thirteen painted five-inch squares, its palette — marigold, yellow, white, tan, pale gray, lighter and darker blues and black — a meteorological color diary. Prest paints the two-inch-deep sides of her panels as well. In this piece, she has painted stripes at the base of the sides, closest to the wall, fewer at the top and more of them further down, so that at the bottom, the panels, new black or nearly black, resemble bound volumes, scientific core samples or stratigraphic models.

“Revolver” and “Omega Fata Morgana,” the two rectangular paintings, are composed of two layers of stripes, with the white background layer, unpainted, adding a third color. In the former, Prest chooses warm and cool reds from almost orange to almost purple, harmonized to create dynamic zigzags. In the latter, she goes with blue and black lines, which suggest in their dazzling regularity the dappled coats, plumage and skins of animals. (A fata morgana is an optical illusion seen near the horizon, caused by light bending through layers of variously heated air.)

The square-format paintings employ the same overlaid stripes, with a few differences. In three works, “Black Lilac Aura,” “Burst” and “Untitled,” Prest uses symmetrical patterns with a more subdued palette or interference moiré, so that we tend to perceive the works as gently modulated planes: folded papers or cloths. In “Sky Film,” “Pink Noise,” and “Heavy Light,” the colors are so similar, or such natural partners in an Impressionist palette, or the textures so fine, that we see them as woven fabrics, perhaps iridescent, like shot silk. “Entrance” and “Green Eye” take the interference metaphor even further, with their resemblance to the static patterns that used to appear on television screens during the analog era.

In “Color Unfolding,” Prest imbues her laborious, meditative paint weaving process, with its like and unlike warps and wefts, with Matissean restorative change and metamorphosis; it’s all so visually redolent and metaphorically piquant.