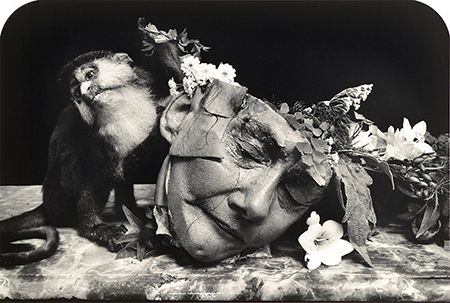 Piercing eyes revealed through two almond-shaped holes in a black mask beckon viewers to come closer in a self-portrait by Joel-Peter Witkin. A white crucifix set between the eyes hints at the artist’s fixation on dualities: darkness and light, permanent and temporary, normal and abnormal, vulnerable and protected, internal and external, attraction and repulsion. The gelatin silver print (“Self Portrait,” 1984) hangs just beyond the first gallery space one encounters, as if the artist himself is a voyeur watching the ways people react to his works or rewarding those who seek out the rarest visual and existential landscapes. Masks recur in Witkin’s oeuvre, where they poignantly channel emotional defenses meant to conceal vulnerability.

Witkin’s meticulously crafted tableaux combining human forms, objects and elements of the natural world reveal his own fondness for traversing mysterious, unfamiliar paths. His subjects include amputees, hermaphrodites, little people, conjoined twins, and others whose physical manifestations prompt complex reactions typically reduced to expressions of fear or loathing. The nude figure of “Madame X” (1981) is reminiscent of Classical Greek sculpture that has survived antiquity because the torso has no arms. But this figure has both women’s breasts and male genitalia. Rather than appearing as titillating sideshow attractions for voyeuristic consumption, Witkin’s subjects are elevated to the realm of ethereal perfection.

Several of Witkin’s still life compositions include body parts sourced from cadavers, placing him within the art historical vanitas and memento mori traditions. “Poet: From a Collection of Relics and Ornaments, Berlin” (1986) sets a severed foot and hand side by side. In “Face of a Woman, Marseilles” (2004), flowers flow from the open head of a dead woman that lays tilted atop a marbleized surface.

Born in Brooklyn in 1939, the Albuquerque-based artist traces his fascination with death in part to seeing a child decapitated by a vehicle during his own youth. Similarly, the prevalence of religious themes in Witkin’s work is rooted in the artist’s childhood, when his parents’ religious differences were a palpable source of conflict and dread.

Witkin often manipulates his master negatives, using methods such as tearing, scratching, sanding, and writing. Then he transforms his prints with techniques that include cutting, collage, painting, and hand-coloring with encaustic. Thus, his creative process affirms the conceptual underpinnings of his work: Beauty abounds, especially in physical and emotional realms beyond the ordinary, expected and unmarred. References to literature, mythology, and the art historical canon occur throughout Witkin’s body of work. “Gods of Heaven and Earth, Los Angeles” (1988) re-envisions Sandro Botticelli’s late 15th-century “The Birth of Venus.” Several other photographs also reference iconic artists such as Spanish modernist Joan Miró and Russian poet Anna Akhmatova. Sometimes the art world’s own narcissism becomes a central character.

This exhibition incorporates several drawings that elucidate Witkin’s artistic process. Some lay out scenes he later composes for the camera. Playing off the duality of the hidden and the seen, these pieces are installed on a wall that we don’t see until we round a gallery corner. The drawings include notes about possible changes, highlighting both the fluidity and the precision of the artist’s approach. Several, including a sketch of former president Donald Trump straddling a giant erect penis (“The Great Masturbator and the Country He Rode In On,” 2017), reflect the artist’s sense of humor and his sardonic take on the ways particular body parts are fetishized. Like the photograph with a crucifix affixed to Witkin’s own mask, the exhibition itself serves as a masterful portrait of the artist.