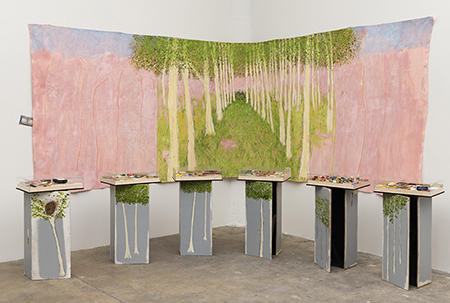 Among Kim Dingle’s aliases’ is Pudgey Pomona, a faux curator that frees up the artist to mix and match impulses. The group show approach, however, is eclipsed by the consistency of her sensibility, which is as ironic as Jeffrey Vallance but as dead serious as Jason Rhoades.

For this group Dingle reaches back 30 years to her emerging artist period, starting outside the gallery building with a “1962 Jaguar MKII 3.8, Home to Miss Pomona,” and inside the gallery with her “Maps & Atlases” (not to mention a few other works from back in the day that loosely add nuance, if not flat-out distraction to the proceedings). Her “Priss” signature works are there too, but really only in a barely noticeable walk on role. Everything else was made in the last (pandemic) year.

At the hub sits the ostensible curator’s research desk, one drawer spilling over with Halloween candies (are we supposed to indulge ourselves?), an old manual typewriter, complete with paper in mid-draft, occupying the power position. It’s flanked by portrait (I use the term advisedly) paintings of her fantasy Assistant Curator, Art Gum, and a mash-up that is specifically identified as Millard Fillmore and Alec Baldwin. The unattractive female figure is slightly oversized for the pictorial space, like a basketball center awkwardly having to duck a bit to get through a door.

It seems like half of our artists these days are using newspapers, whether as a collage element or for a ground over which to paint. Dingle goes with history: the Kennedy Assassination, Watergate, and World War II stories only less prominent than the daily ads for Kmart and Piggly Wiggly, which become a playground for colored highlighting. What’s off center is the timeline of the headlines. Each precedes or follows what we know to be the main story.

The flow of the installation then takes us to home sale classifieds (remember classified ads?). Each features a property, with one of the ads circled, and we are convinced, though not necessarily truthfully, that the circled home is the one depicted. In some areas or features of each image the color is jacked up in a way that clarifies the difference between eye appeal and sales appeal. Don’t let your gaze wander from these without noting the prices, which are really what they were once upon a time. Dingle, a native of Pomona (the giveaway just who the Pudgey curator is, in case you were wondering) who grew up there in the 1950s, allows this note of nostalgia to turn adult sobriety back toward childhood fantasy.

If you turn around there is a table full of marbles, dice, boxes, playing cards … personal junk gathered into a memory landscape. We are held at a distance by a velvet rope, simultaneously preventing us from damaging the delicate arrangement, and elevating it to a fake celebrity status. It feels like it’s there more to fill a hole in the gallery space than to add substance to everything else to be seen. A few other such individual works serve as visual asides, but the real climax here are the erasure works introduced by the direct Rauschenberg quote, “Erased deKooning courtesy of MOCA…..maybe.” She has in this smattering of works got a much larger story to tell. There is the origin of the material (“Latex,” “Rubber Trees,” “Rubber Plantation”); it’s historical meaning (“Queen Victoria’s Rough Ride Before Rubber,” and “Queen Victoria Gets Rubber;” think about it); some hilariously sweet satire (“Pink Monkey and Droppings”). But mainly there is the centerpiece “Erasure History,” with its six vitrines of eraser arrangements set on pedestals open just enough to reveal the sharp saws inside, all placed before a painting of the rubber trees from which it all comes from.

Finally, I cannot overlook the work most likely to be go unnoticed except in a glance, a circular arrangement of animal snapshots from family albums dating back the better part of a century. Aside from its potential to brainlessly mesmerize us, it serves to activate the old “Maps and Atlases” placed immediately behind them. The “United States of American Drawing from Memory by Las Vegas Teenagers” takes on the presence of a stampeding herd of animals as a result. And really, that sums up what makes this such a delightful show. There is a lot going on, but each chapter is absorbing on its own terms. When you leave it feels like you’ve just witnessed a stampede. And indeed, you have.