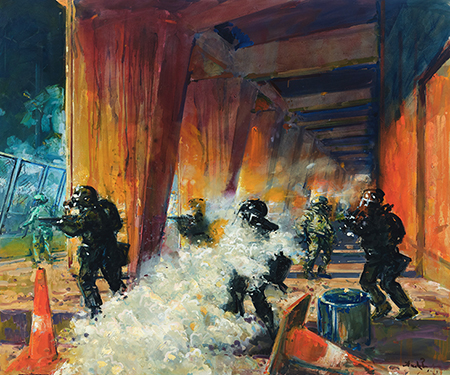 Painter Henk Pander (b. 1937, Haarlem, Netherlands) is renowned for his luscious still lifes, landscapes and portraits, but most of all for his sprawling tableaux of bedlam, violence, destruction, and perversity. Strictly speaking, those latter paintings are not apocalyptic, as Pander eschews a Biblical context, but they certainly don’t shy from showing our enduring capacity for raining terror upon our fellow humans. Most of his mise-en-scènes incorporate anachronistic elements; some are futuristic, influenced by science and science fiction, while others more directly reference historical events, including World War II, the Vietnam War, and 9/11.

The four paintings (all from 2020, all 60”x72”) in this small but explosive exhibition are among the most time- and place-specific Pender has produced. Each references conflicts that broke out between police and protestors here in Portland following the murder of George Floyd by Minneapolis police officer Derek Chauvin on May 25, 2020. Those protests, the riots in their wake, the clashes among police, Proud Boys, and antifa activists, and the violence, vandalism, and theft committed by unaffiliated hangers-on were a pivotal moment for this famously progressive city. Many Portlanders mark these events as the turning point in a recent but long-simmering spike in violent crime and urban blight. Pander attended many of the protests, dually as a concerned citizen and an artist snapping photos of the mêlée to use later as referents for the paintings we see here.

Pander is not a political painter, per se, but a universalist who sees discrete instances of aggression and incursion in the context of the long trajectory of civilization’s discontents. As a child in the Netherlands, he lived through the Nazi Blitzkrieg and is still haunted by “the threat from above, the threat from the sky.” As an immigrant to the United States in 1965, he became active in the anti-war movement, perhaps most memorably with his controversial 1969 solo show at Portland State University, which commingled scenes of war with references to the nascent sexual revolution. Although his civic involvement with Portland began upon his arrival from Europe (he has painted portraits of Oregon public servants, designed stage sets for Portland Dance Theater and Oregon Ballet Theater, and pitched the Regional Arts & Culture Council a still-extant visual history of Portland based on Amsterdam’s “Topographic Atlas”), it is fair to say that his activism on the local scene is subsidiary to his wider quest to chronicle the human condition, generally through the glass darkly. “Paint a picture of your time,” an old mentor of his, painter Arie Kater, told him the year before he left the Netherlands. And he has.

Pander’s virtuosic technique, honed at the Rijksakademie in Amsterdam, marries the close observation and emotional overtones of the Dutch Masters with the textural verve and dynamic brushwork of Neo-expressionism. It’s a sensibility that has made Pander an enduring fixture in the Pacific Northwest as well as in his native country, where his works reside in the permanent collection of the Rijksmuseum, home to Rembrandt’s iconic “The Night Watch.” Far from a neutral documentarian, Pander makes compositional and chromatic choices that heighten his subject matter’s already fever-pitch tensions. In “Triggers” he bathes the colonnade of the Hatfield Federal Courthouse in menacing blood-orange tones, with painterly drips standing in for graffiti. He renders the white billows of tear gas enveloping riot police with incongruous daintiness, the smoke in flurries of filigree, as if grandma’s doily has been repurposed for civil disobedience.

The courthouse’s columns are barricaded in “Stain,” our eye drawn to a black protester confronting riot police. Pander accentuates the reflections of rainwater soaking the street, metaphorically reminding us that a major storm has just blown through town. In “Court,” the artist depicts explosions of Roman candles and Molotov cocktails as if they were sprays of fresh flowers, another touch of visual irony and cognitive dissonance. The colonnade is deserted in “Passage (The Summer of 2020),” the riots having died down past witching hour. Broken glass litters the sidewalk, the hulking structure resembling more a fortress in ruin than a tower of justice. To invoke Pander’s own description of the painting, the columns “have turned implacable and ominous.”

This is cityscape as hellscape, yet there’s enough held at aesthetic arm’s length here to keep the authorial viewpoint ambiguous. Who is at fault here, the protestors, the federal troops and local law enforcement, the apolitical vandals and opportunists, or the then-President stoking culture-war bonfires for crass political gain? The paintings stand back and let us parse the city besieged. Like his Netherlandish predecessors Hieronymus Bosch and Pieter Breughel the Elder, he conjures phantasmagorias embedded with symbols and narrative hints but lets the viewer’s eye and mind decipher what’s going on and why. This allusiveness is part of why this artist is not only beloved, but relevant 66 years after he enrolled in art school here. This exhibition captures Portland at an inflection point that is still fresh in our minds, while reminding us that inhumanity, unrest, and persecution, tragically, are not momentous but timeless.