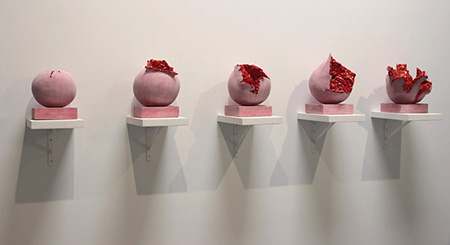 With a seemingly endless supply of reported catastrophes assailing us — freak weather, gun massacres, corporate corruption, fascist putsches — nervous doomscrolling has become a fact of current American life — at least for those with a strong enough gut not to tune out in defeat. Remember when post-apocalyptic fantasies were innocent fun? I remember seeing the “Warheads” ceramic sculptures of Robert Arneson during the militaristic Reagan 1980s and admiring their combination of politics and aesthetics, Jonathan Swift’s saeva indignatio (fierce indignation) expressed in over-the-top, take-no-prisoners comic ferocity. Tell us what you really think, Bob.

The ceramic sculptures of Pancho Jiménez comprising “Impressions & Revelations” continue the Bay Area tradition of ceramic satire, but in a subtler vein, absent Arneson’s larger-than-life polemical brio but no less meaningful or effective. The neutral presentation of Jiménez’s pseudo-artifacts — featuring cute mass-market imagery jumbled together as if engulfed in fire, flood, earthquake, or lava flow, and covered with a glaze that suggests amber-trapped insects — lets us do the interpretive work rather than accede passively to the artist’s dictates. Post-apocalypse now, if you want it.

The ten free-standing pieces on pedestals and nine wall-mounted reliefs in the show could easily be taken by a cursory look as brilliantly colored archaeological artifacts. Jiménez uses massive, compressed forms to contain his cultural plasmas, made from commercial molds used for what had been deemed kitsch — figurines and tchotchkes — at least before A-list artists embraced low-class motifs for high-class patrons. Easy irony is not the point of Jiménez’s cultural critique, however. He conflates the past, in the form of tripods, plaques and other ceremonial artifacts; the present, with his mass-market decorations; and a hypothetical future in which these transtemporal works (or ruins of works) can be surveyed by a perhaps wiser, gentler race of survivors.

The artist depicts America’s current mass culture of easy fun, historical amnesia, and incessant distraction in the wider context of history: sub specie aeternitatis, under the guise of eternity, in the “eternal present” of art, especially the ancient pre-Columbian art that has long fascinated the artist.

The device of geometric wholes broken or eroded to reveal their innards was employed by the Italian sculptor Arnaldo Pomodoro. Jiménez revives it, with a pop-culture dimension, to good and timely effect. “Cenotes” is a three-legged glazed ocher sculpture that suggests the bronze tripods of ancient cultures, as well as a giant’s molar, yellowed by time. Where the tooth’s nerves should be, encased in dentine, are deep cavities in which we discern composite mechanical parts thrown together, like rubble encased in Roman concrete. (Cenotes are sinkholes in limestone flooded with fresh water that are found in the Yucatán peninsula.)

“Gaze” is a purplish-gray glazed circular wall plaque in low relief, covered by faces cast from molds, their eyes closed. The boundary between the faces is itself suggestive of a stylized closed eye. The totality resembles the ommatidia-faceted eyes of flies and dragonflies. “Nucleus” is a large reddish-orange sphere covered by impacted gewgaws that suggests.  a world overtaken by trash and trivia; its formal obverse, the five smaller “Progression” sculptures, suggest a sequence of explosions from within as a delicately textured spherical cell sacrifices itself in order to replicate. Jiménez's five bleached-white plaques of internet company logos — Facebook, Twitter, Instagram, YouTube, Snapchat — posit an archaeology of the ephemeral, and would make for wonderful tiles in some future corporate temple done à la Frank Lloyd Wright.