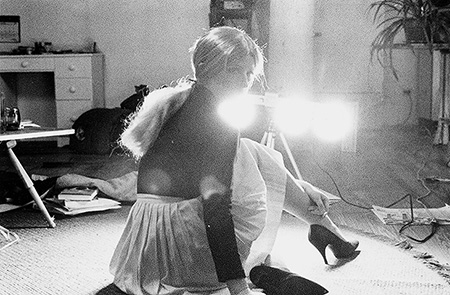 Hauser & Wirth Los Angeles has mounted an impressive Cindy Sherman survey of what has become iconic film stills-based work from 1977-1982. Writing about what so many critics have already so thoroughly analyzed presents a peculiar yet welcoming challenge: how to find something else worth saying about work that has become a cultural trope? I’d have to respond at some point to what has become many of the exigent rote and cliched formulations of Sherman’s work before I could really connect to its pulsing life force.

So I began by taking down notes very quickly as I stood before each piece, imagining that I was looking at something I had never seen, read about, or heard discussed before. As if anticipating my intentions, the gallery had made a curatorial decision to omit dates, titles, and explanatory wall text. It occurred to me that this collection of “notes toward a review” (smoothed out and spell checked) came to represent my best effort to convey my most spontaneous and heartfelt insights into Sherman’s early work forty years after they were first introduced.

• Sherman’s large Chromogenic color prints from 1980-1982 fill the first large gallery in this show and at once pay homage and allude to the grainy cinematic images, textures, and shadows of European and American film Noir. They also point to the work of such giants of Modernist art photography as Imogen Cunningham, Edward Weston, Henri Cartier-Bresson, Claude Cahun and Ansel Adams. At the same time the colors in these works pulse with an iridescent warmth that moves the work in a decisively painterly direction, with evocative accents gleaned from the palettes of Raphael, Rubens, Diebenkorn, Frankenthaler, Caravaggio, and Vermeer. The embrace of art history is both broad and deep.

• The colorful photographs in the first three galleries of the show present intense and dramatic narrative moments in which the artist poses, costumes, coifs and makes herself up (all these tableaus having been constructed in her studio) to animate an array of characters acting out parts like performers on a stage or in a film. Yet each photograph stands starkly, perhaps lyrically alone, fleshing out the “otherness” that signals successful works of art. That said, one can’t help but sense something that came before these “snapshots in time.” It is possible to see these “frozen” personages as characters drawn from a narrative, but not in search of the rest of the story that might complete and fulfill their unique moment.

• More visually complex than complicated, each of Sherman’s photographs in this first gallery, and extending throughout the entire show, presents picture planes laced with Cubist-like geometry that shatter or sliver the photographs into angular avenues of entry. They both collapse time and offer simultaneous multiple viewpoints into the scenes they depict.

• The young woman in each photo (Sherman in various wigs, makeup, styles of clothing, poses, etc.) is always involved in heightened states of thinking, of trying to figure something out. It’s always the woman’s eyes on which the photos focus our attention. Her gaze tends to shift sideways, breaking the boundary of the picture plane while simultaneously circling back into the artist’s own brain. It is as if there is a biological movie-making machine inside of the artist’s head that malfunctions, solidifying its backed-up flood of images into a luscious and lusty collection of scenes that the cast of characters inhabit.

• The figures in these colorful/colorized works … were they conceived as self-portraits or fantasies or fragments of selves not yet fully resolved to Sherman herself? They semi-recline on beds, couches, the floor. (A fellow gallery attendee blurts out loud to no one in particular, “They’re selfies before selfies!”) The figures’ sexuality is explicitly posed and exposed, yet the prints also manage to retain the power to transcend their own organicism. They pulse and vibrate within their earth-toned and iridescent prisms like synesthetic tone poems for the eyes to hear and the ears to see.

• The clothing and haircuts in which Sherman dons her personages in several photographs suggests an androgynous outlaw semiotic. She starts off as a stand in for James Dean, but is then dressed and doctored up under the direction of her own free-flowing imagination. Beyond the cultural trope that fashions Sherman’s work as an objection to the objectification of women, one could easily recognize and cheer on in these personas the indomitable, resilient, resourceful, and robust human spirit that fights any trace of codification, commodification, or cliches geared to define or confine it.

• The entire back gallery displays 70 of Sherman’s “Untitled Film Still” series, which closes the show. Several of these small and often exquisite black and white pictures contain maquette-scaled echoes of images found in the larger colorful works hung in the three other galleries. Some might find these shots the sexiest in the show, as well as recognizing in them homages to the legacy of both the black and white “art films” of the 1960’s, and the city views, street scenes, architectural interiors, and overall genre of urban photography from previous decades.

• Virtuously crafted, sculptural, and at once stark and voluptuous, this group of photographs, begun in the fall of 1977 (soon after the artist, at twenty-three, moved to New York City), is regularly cited as Sherman’s career launching point. This remains work that, free of any context, is fresh to the eyes and restoring to the soul. No wonder Sherman is among the most influential artists of her generation.