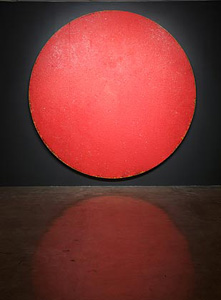 The monstrous object of beauty in Michael David's new abstract series "Tondos, Night Skies and Silence" is a nine-foot red tondo, or circle, in encaustic, a favored medium of the artist that mixes pigment with heated beeswax. Called "All Good Cowboys Have Chinese Eyes," the piece compels opposing descriptors of "monstrous" and "beautiful" because it is simply so dominating, so red and so primordial. At the same time the form of the circle lends it serenity. The other seven encaustic pieces in the show are rectangular and of various sizes, but share in the frenzied layering of paint, small splotches of color and intense use of texture evoking geological artifacts.

"For SRV (Large)," at seven feet wide, is the second attention-getter, again incorporating a sea of Chinese red. In this case, though, corners and edges have been either scraped away or built upon - depending on your perspective - to reveal mottled surfaces. For less intimidating viewing, the show groups together three small rectangular pieces: a smaller version of "All Good Cowboys Have Chinese Eyes," the inviting gray textures of "Sand and Sea" and the glossy blackness of "The Navigator (Small)." Along with "The Navigator (Large)" on the opposite wall, the two paintings offer sparkles of color that can send viewers either on a nighttime ocean journey or a hurtling trip through space. Although David has a history of imbuing his work with political views, the emphasis here is on visual spectacle and an immersion in the encaustic method.