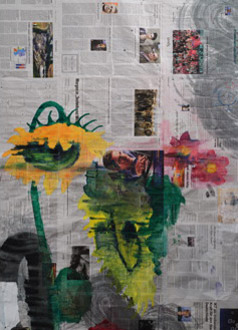 Gabriel Vormstein, 'The Teeth of the Wind and the Sea' (detail), 2010, mixed media installation

For German artist Gabriel Vormstein, everything that can be done on canvas has been done. So he paints on newspaper. In his U.S. museum debut, Vormstein has completely covered the walls of Artpace's Hudson (Show)Room with his paintings on black-and-white German and pink Italian newspapers, contrasting the news of the day with floral designs, figures derived from Egon Schiele, geometric forms inspired by Francis Picabia and landscapes -- the real and unreal -- in a 360-degree immersive installation.   A sunflower of easel-size proportions reflects the usual size of his paintings, but he seeks to obliterate the boundaries between reality and fantasy in this all-encompassing show. Humor lightens the mood; including a set of footprints dividing so one foot goes one way and the other another as well as a cat gazing hungrily at birds flying on a different wall. But Vormstein's choice of ephemeral materials suggests a link between the degrading effects of age and the yellowing deterioration of news.