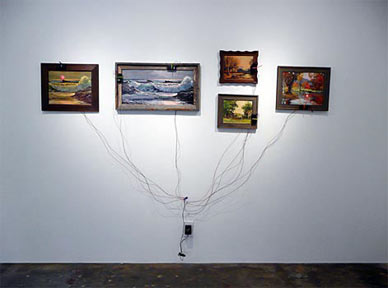 Two worlds collide in Allison Wiese’s alterations of Robert Wood’s landscapes, painted in the mid-twentieth century and well-represented in reproductions on motel and living-room walls. Wood portrays an unspoiled nature--the powerful ocean, the pristine forest, the meandering river. Even the occasional rustic farm building or bridge doesn’t disturb the peace and harmony of these rural scenes. Enter Wiese. With the insertion of one or two blinking LED lights and a battery pack on each Wood print and additional wire leading to a transformer and wall plug, this serenity is ripped apart. She drags these scenes into the twenty-first century, where even these tiny LEDs, on our battery rechargers, surge protectors and appliances, because they are constantly on, threaten the continued existence of the natural world not just as we’d like to believe it is, as in Wood’s portrayals, but as it really is as well.