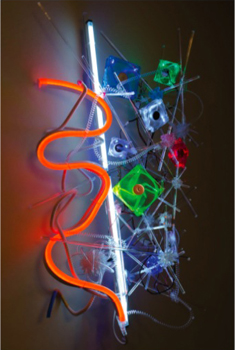 Adela Andea's sculpture extends the problematic known as "new media art." An upshot of digital technology, it is usually interactive and often iconoclastic. However, the work of this young Romanian Texas-based artist Andea is an exception to the rule. Though not interactive, her pieces are fully tactile in their three-dimensionality, activating and acting upon multiple senses simultaneously. They are truly beautiful in their light-beam glowing whirly-gig free-form formalism.

The cold cathode florescent lights, LED lights, computer source, readymade plastics, and hanging computer case fans (part of the cooling system inside desktop computers) of "Dragon" constitute a monster of sorts. It is mounted on the wall like a large day-glow lizard that has emerged from the post-apocalyptic sludge of a radioactive gas spill. Hers is an aesthetics of exposed electronics. As Andea says, "I want to make beautiful the inside of the computer."