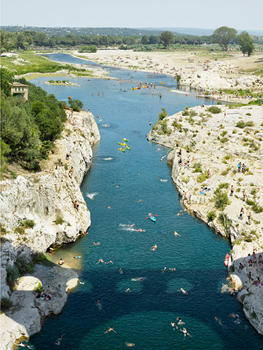 German photographer Lukas Roth's large-scale, super-high resolution interior and exterior landscapes inevitably bring to mind the work of his more senior countryman, Andreas Gursky - the acknowledged master of the genre - but Roth brings his own particular style to the game. Though the work has been pulled virtually from the recent archives - the six photos date from 2005 to 2007 - they're none the worse for wear. Even "Untitled (Lan Party)" (2007), a nearly nine-foot-wide panorama of some type of online gaming summit featuring participants and their accompanying range of engaged expressions as they attend to their computers, doesn't feel dated. And even if it did, the sheer spectacle captured is timeless.

At the other end of the activity spectrum, "Untitled (Beach)" (2006) features an anonymous curving cove of European coastline packed with beach-goers. Oddly enough, none of them are swimming. Roth has somehow managed to capture a moment in which the azure waters are completely free of a single one of the crowd. "Untitled (Pont du Gard)" (2005) is a river-scape shot from an arching bridge that provides more than ample doses of innocuous voyeurism, with a plethora of cliff jumpers, swimmers and canoers for the eye to get lost in.