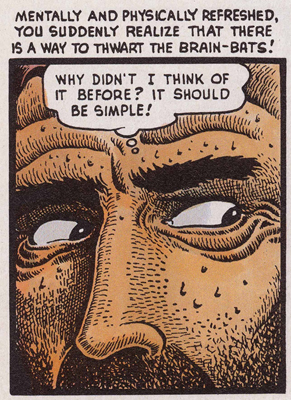 There’s something mesmerizing about comic book art - the derring-do, the expressive faces, the wild leaps of imagination into shadowy worlds and eerie creatures - not to mention the subtext addressing topical matters of politics and society. Even with all that, comic book artists and their legion of fans sometimes don’t get their due. Phoenix artist Jon Haddock is remedying that with two shows he co-curated under the banner “Idios Kosmos : Koinos Kosmos.” Together the shows are organized to demonstrate what acclaimed science fiction writer Philip K. Dick (a hero of Haddock’s) meant when he used the Greek term. We struggle to balance the order of the world, or kosmos, between private (idios) and shared (koinos) reality. And certainly comic book artists and their stereotypically socially awkward readers have cerebral inner visions that not everyone shares in.

The first part, “Masters of Collective Reality,” is essentially Haddock’s shrine to nine of his favorite comic book artists, representative of different eras in comic book art, and representative of divergent styles. The classic work of Basil Wolverton (“The Brain-Bats of Venus”) shares space with the computer-generated manga of Jennifer Diane Reitz, for instance. The fact that most of the pieces are enlarged digital reproductions of select pages doesn’t detract from one’s appreciation of the artists’ flair - there are masterful strokes, dashes and crosshatchings everywhere, along with panels and word bubbles that gleefully break the rules.

While the first gallery is brightly lit, Haddock wants it purposely dark in Part Two, titled “Us Versus Them,” where he introduces his own inner life as a comic book fan through sculptures and tableaux. Most intriguing are the two life-size rooms that represent Haddock’s work space - a bear costume figures in somehow - and his home space, where several small, indecipherable paintings face his chair. Opposite the dioramas are several half-life-size papier mache sculptures of male figures; with their menacing looks and hostile postures they could have jumped off the pages of some True Crime comic book. Yet another area is devoted to Haddock’s replicas of comic book-style laser guns and other weapons.

While both shows celebrate the comic book form and its faithful followers, some of the cult references and inside jokes are best left for the enjoyment of comic book geeks.