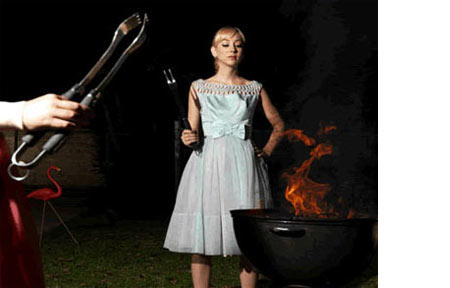 Fans of music visionaries Danger Mouse (Brian Burton) and Sparklehorse (Mark Linkous), eager to hear cuts from their completed but unreleased (for contractual reasons with label EMI) album, “Dark Night of the Soul,” outnumber the usual art crowd perusing this show. They shuffle around the gallery, swept from one grouping of David Lynch’s fifty photographs to the next in response to a light that shines down on the photos relating to the track that’s currently being played. As you might guess from the album’s title, the pictures Lynch produced in response to the music range from “dark” to “dark and surrealistic.” Cops use a garden hose to spray water on a guy in his briefs. An oversized human head is served as the main course at a family dinner. Each grouping of four photographs tells a story of shared images and masterful artistry.  The rich color and deep focus of “Untitled (Little Girl #3)” shows a charcoal grill burning with orange flames dancing against a sunken tropical sky and emerald blue water. The tranquil dance of a girl dancing the Hulu becomes obscured against the flames and lost beyond the sea. Just like the pair of dice staged on a shag green rug in the second room of the gallery, in Lynch’s interpretation of “Dark Night of the Soul,” you never know what you’re going to get.