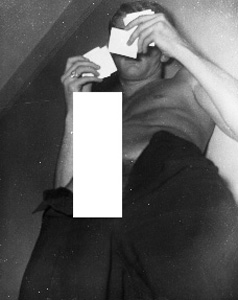 Though media hucksters make bombast out of the occasional politico’s transgression, sexual provocation is steadfast and normal. It flows like the frothy white noise of gears shifting, wheels turning, and bodies chafing. Based on Michel Foucault’s three-volume “The History of Sexuality,” “Sex/Twist” gathers the work of seven artists in order to read sex between the lines. The first show of this recently relocated gallery’s new director Liliana Bloch, it is tight and resolved. Formally it bears a steely sense of allover grayness that enhances the theme of sexual subversion as foundational to everyday life.

Sharon Engelstein’s bulbous, pneumatic “Triplet” provides a contrapuntal three dimensionality to the majority of works on paper. Something like a blown-up hemorrhoid, “Triplet” seemed both inside and outside the body’s intestines and curving buttocks. Stacked up against the wall, Bryan Florentin’s “Archives” invite the viewer to pick through stacks of framed photographs. The innocuous images on the outside belie the naughtiness of others hidden behind. Debora Hunter’s “Past, Present, Future Perfect Tense” is touched by the psychoanalytic cheekiness of the Pictures Generation. It is a black and white personal family photograph cleverly manipulated and repeated three times over.